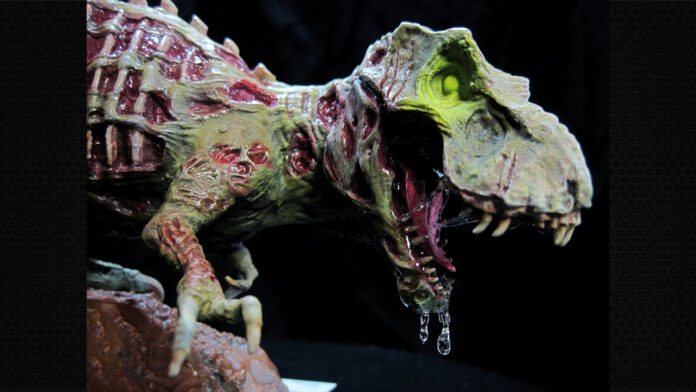 This is my buildup of the Zombie T-Rex gaming miniature from Gale Force Nine. The kit is resin and came in multiple parts, with pretty large gaps and significant fit issues.

After removing the excess resin and a thorough wash, I glued the parts with thick CA to help with some of the gap filling. I used Apoxie Sculpt to fill in the rest of the gaps and seams, blending them together into the natural folds and wrinkles of the leathery skin.

I primed with Tamiya Gray Surfacer Primer in an airbrush, followed by a spray of Tamiya Fine White Primer from above and Mr. Finishing Primer Black from below for a zenithal sketch.

Nearly every color used was from Army Painter. The two main colors were Necrotic Flesh for above and Crypt Wraith for the under colors, which were drybrushed on heavily. I then alternated between paint washes and drybrushes, slightly altering the base colors each time for natural variation. The gore was done the same way, using Abomination Gore as the base.

The bones, teeth and nails were painted Leather Brown, then layered with Skelton Bone, washed with Mid Tone the highlighted with Drake Tooth.

After a gloss seal and flat coat, I brushed Vallejo Gloss Varnish into the gore and mouth.

I finally took some 0.25mm fiber optic and used it with cheap UV craft resin to build up the saliva and drool.

The base was simply washed and drybrushed with various Apple Barrel colors, then sealed with a satin before brushing various earth colored brown chalks over it.

I don’t normally paint miniatures, but this was fun to do and went faster than I expected it to. I really like the result, even though the camera has a difficult time picking up the more subtle variations of the pale, dead skin.