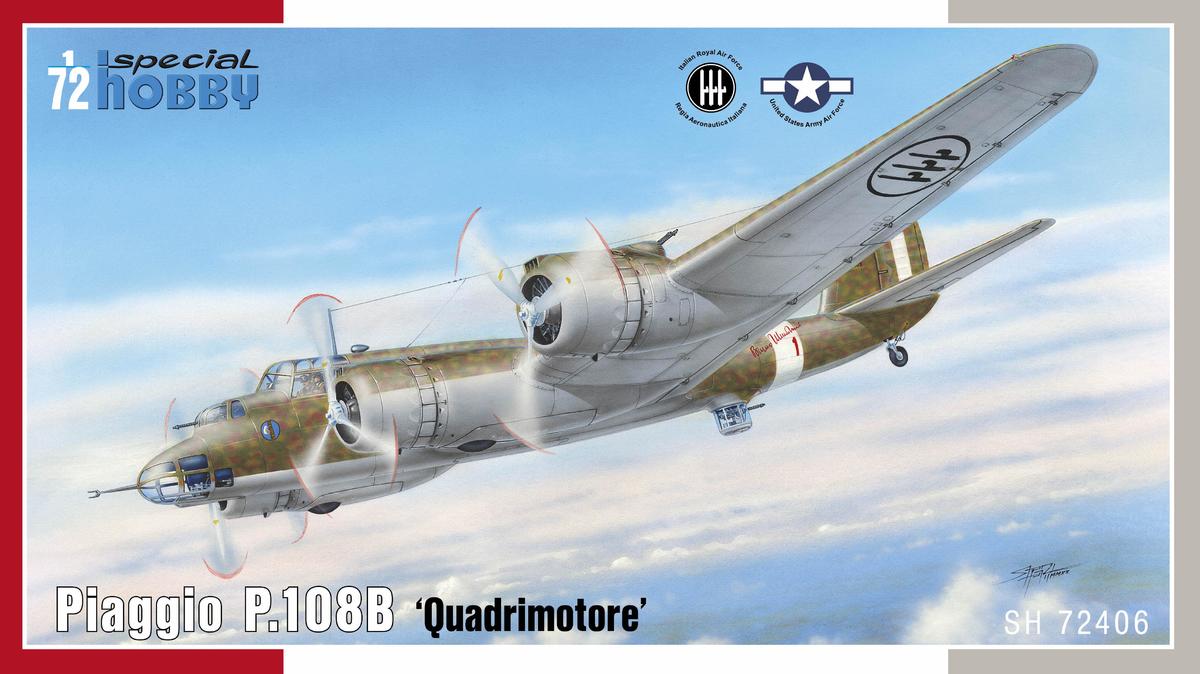 Piaggio P.108B 1/72
The Piaggio P.108B kit had already been re-released once in June 2020. And we, unfortunately, did not manage to estimate the requested number of the kits needed to satisfy all the modellers. The kit got sold out fairly quickly. So, now the kit is being released
once again. The type was the sole Italian four-engined bomber of WW2 and was mainly used to fly long-range bomber missions against Gibraltar and targets in Africa. Our model brings both styles of the nose section, with as well as without the gun turret. A total of four styrene sprues is joined by a fifth one, 3D-designed sprue, one clear parts sprue, a sheet of decals catering for three Italian airframes and one captured by the US troops.
– Re-release featuring a new sprue and new resin cast parts
– Both nose styles
– Decals for four aeroplanes including one US captured 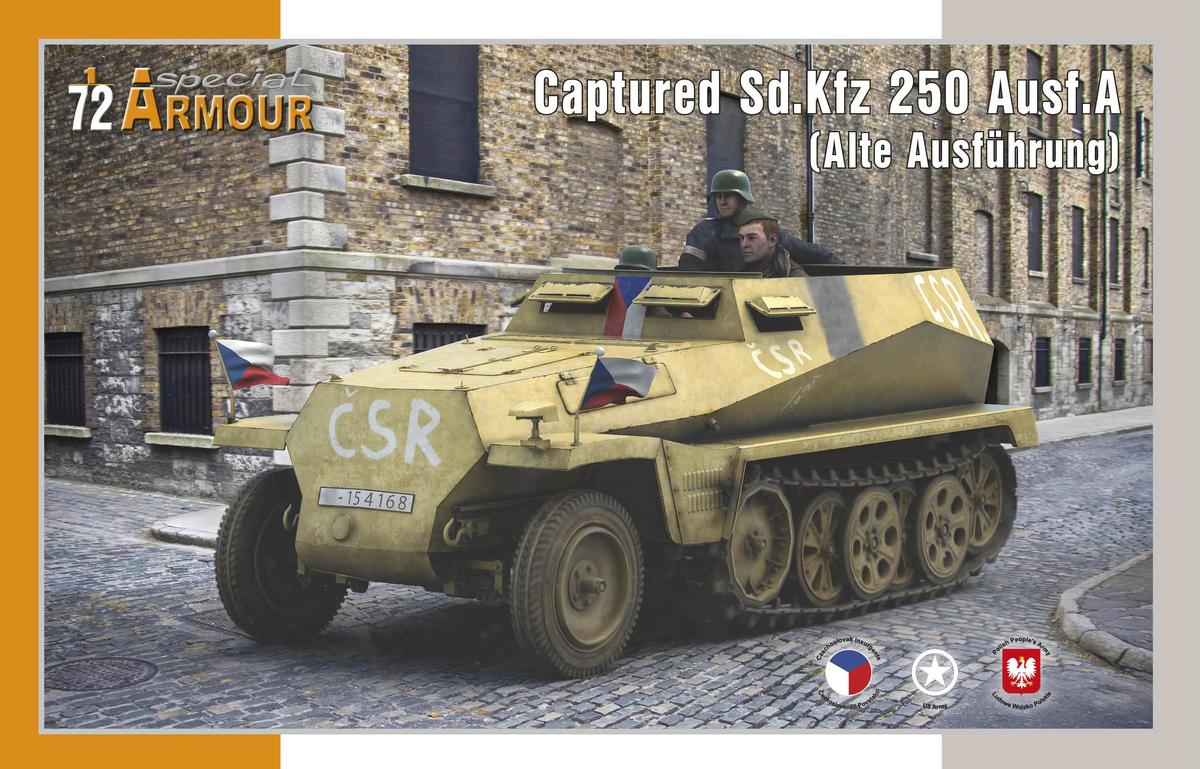 Captured Sd.Kfz 250 Ausf.A (Alte Ausführung) 1/72
The earlier version of the Sd.Kfz 250 with a hexagon-shaped body armour was one of the most widely used German WW2 armoured personnel carriers. The type was in production and used since 1941. In 1943, the vehicles begun to be subsequently replaced by a later type which allowed easier production, the Sd.Kfz 250/1 Neue Ausf.A. Both versions remained in service until the end of the war though. Some of them also fell into the hands of the Allies and were put to military service as well.
Our model with fine detail throughout comes with styrene tracks and offer three colour scheme options. First, there is a sand-painted vehicle with CSR letters on the body (abbreviation for Czechoslovak Republic) which was used by Czech insurgents during the May 1945 Prague uprising. Next is a green-painted vehicle no.10 bearing the Polish Eagle markings, which was operated by the Polish Army during the liberation of Poland. And the final option is a white-star marked vehicle which was captured by the US troops at the Battle of the Bulge in the Ardennes in the winter of 1944. The vehicle retained its original German camouflage with only the stars added.
– Interesting camouflage schemes
– Model with plenty of detail 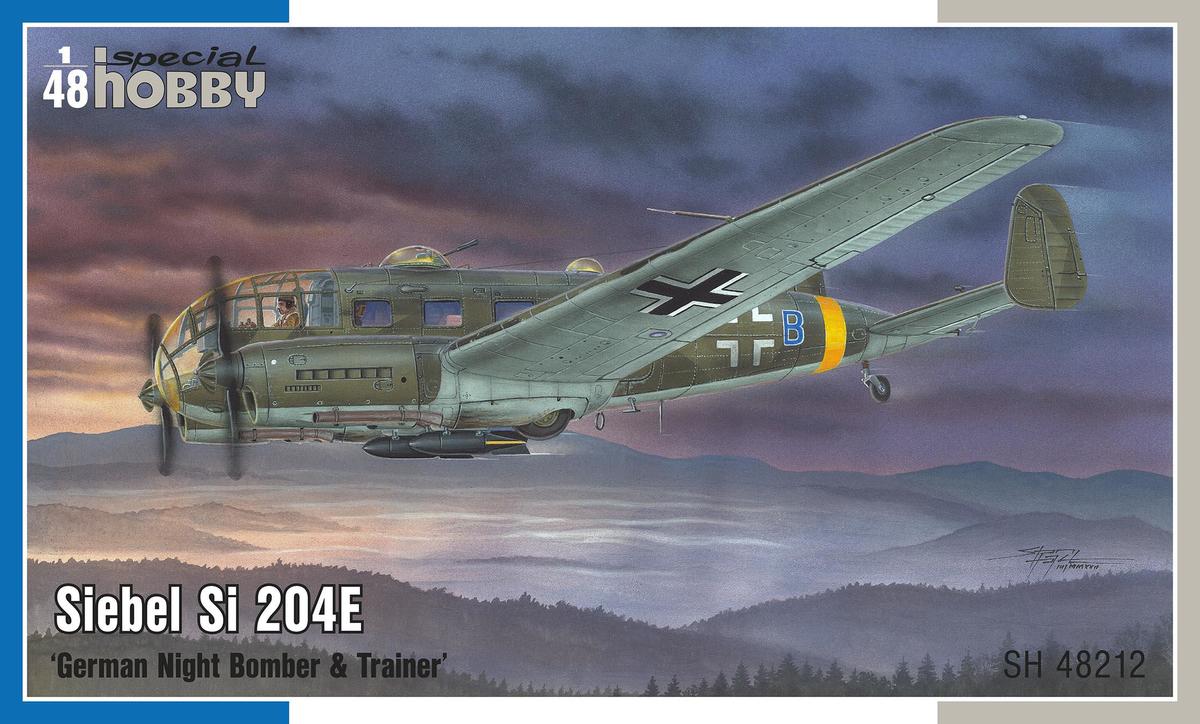 Siebel Si 204E ‘German Night Bomber & Trainer’ 1/48
The Siebel Si 204A and Si 204D were the transport and trainer versions of the twin engined aeroplane originally built to be operated by the Lufthansa as well as (and mainly) by the Luftwaffe. In the war years, a trainer bomber version was built and later used in the night bombing role. This type was designated the Si 204E and a pair of prototypes and a small batch of Si 204E-0 production airframes were built. The planes were used in night air raids against the enemy, including operations against the Slovak National Uprising. After the war, the production went on in Czechoslovakia, the new airframes being known as the Aero C-3 type and were the mainstay of the air force bomber units well until the new Soviet jet bombers came in 1955.
The kit consists of 10 grey styrene sprues plus two clear ones, a sheet of decals with markings for three German airframes.
– Eye-catching version
– plenty of detail both on the outside and in the cockpit areas
– more sets and figures also available separately