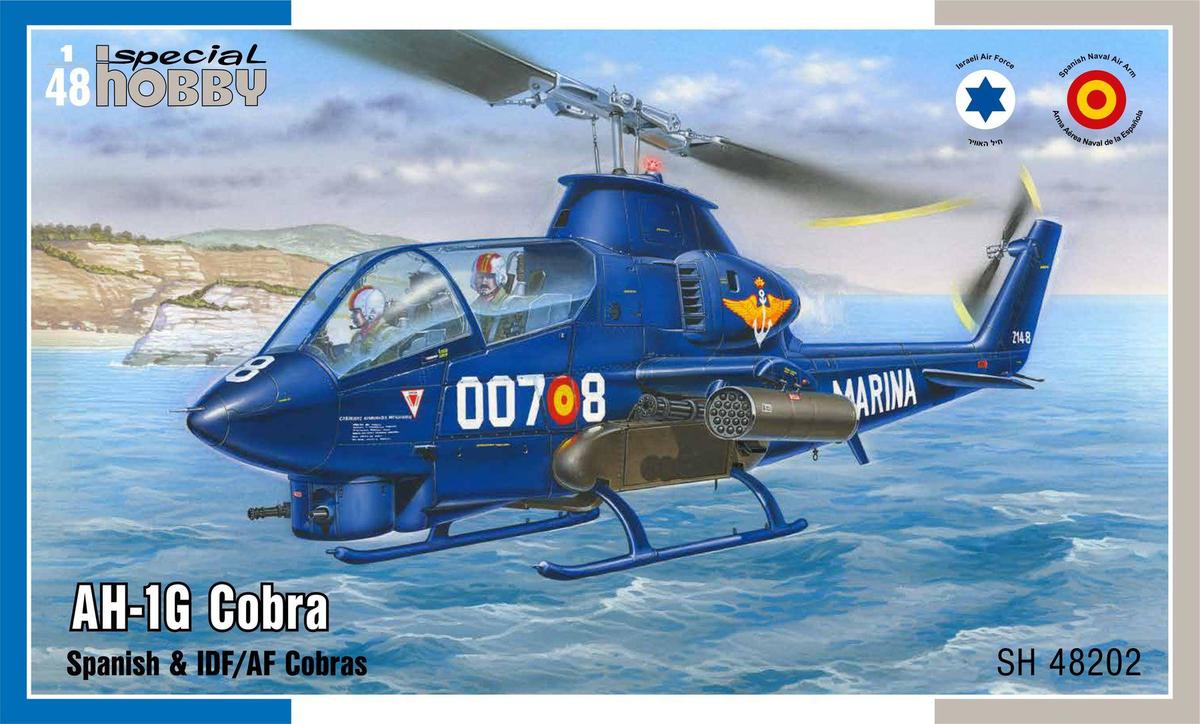 1/48 AH-1G Cobra ‘Spanish & IDF/AF Cobras’
The AH-1G Cobra was the very first helicopter primarily developed for anti-ground missions. AH-1G Cobras saw their combat premiere in Vietnam in 1967. The early machines can be recognized by the tail with a port-side mounted tail rotor, later ones had the usual configuration of the tail rotor on the starboard side. The AH-1G became the first member of a really wide family of ground attack helicopters which keep on serving until these days. The G version fought in the Vietnam war, saw service in the skies of the USA, Westen Europe and was also successfully exported abroad – the G models could be seen flying both in Spain and Israel.
And this is what you will find in our first boxing of the quarter scale Cobra kit – superbly detailed kit coming on as many as ten styrene sprues joined by one of clear parts, plus colour options for two machines of the Spanish Navy in fancy dark blue guise and another two, though in drab olive, which can boast themselves by taking part in introducing the idea of armed combat helicopters to the Israeli air force. Let us also mention that all these four airframes were fitted with the Vulcan cannon-based M35 weapon system carried along the sides of the fuselage (ammunition boxes) and under the port-side stub wing (the cannon itself)

The model of the historically very first combat helicopter
Top-notch quarter-scale AH-1G model kit made to the current standards. Any other model in this scale is hugely outdated.
Decal sheet with a full set of stencils and markings for four machines 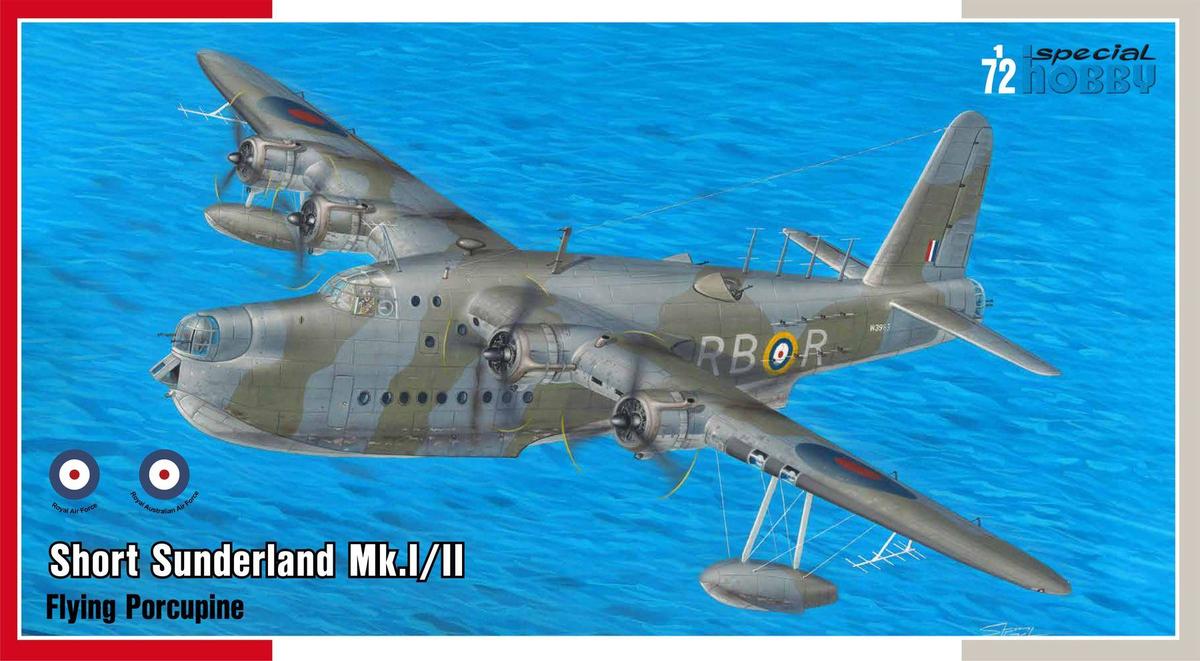 1/72 Short Sunderland Mk.I/II ‘The Flying Porcupine’
Our kit features one of the arguably most famous flying boats of aviation history. The Sunderland is arguably one of the most famous and most well-known flying boats in the history of aviation. Its initial version, the Mk.I was introduced to service before the outbreak of the war while the Mk.II version was the first Sunderland variety to start serving with the British military in the war years. Both these versions differed from the later ones by having sharp-shaped hull step and also featured twin dorsal fuselage gunner positions. Only the latest batches of the Mk.II featured the single dorsal gun turret so very much typical for Mk.III and later airframes. The very long range and heavy armament made the Sunderland feared adversary and a very successful Nazi-submarine hunter which was very much capable of defending itself against the long-range Luftwaffe fighter aircraft.

A model of the British anti-submarine flying boat.
The decal sheet brings markings for a 10 Sqn RAAF machine plus three more operated by the RAF.
Highly detailed interior parts
Panel lines made to scale, not over accentuated 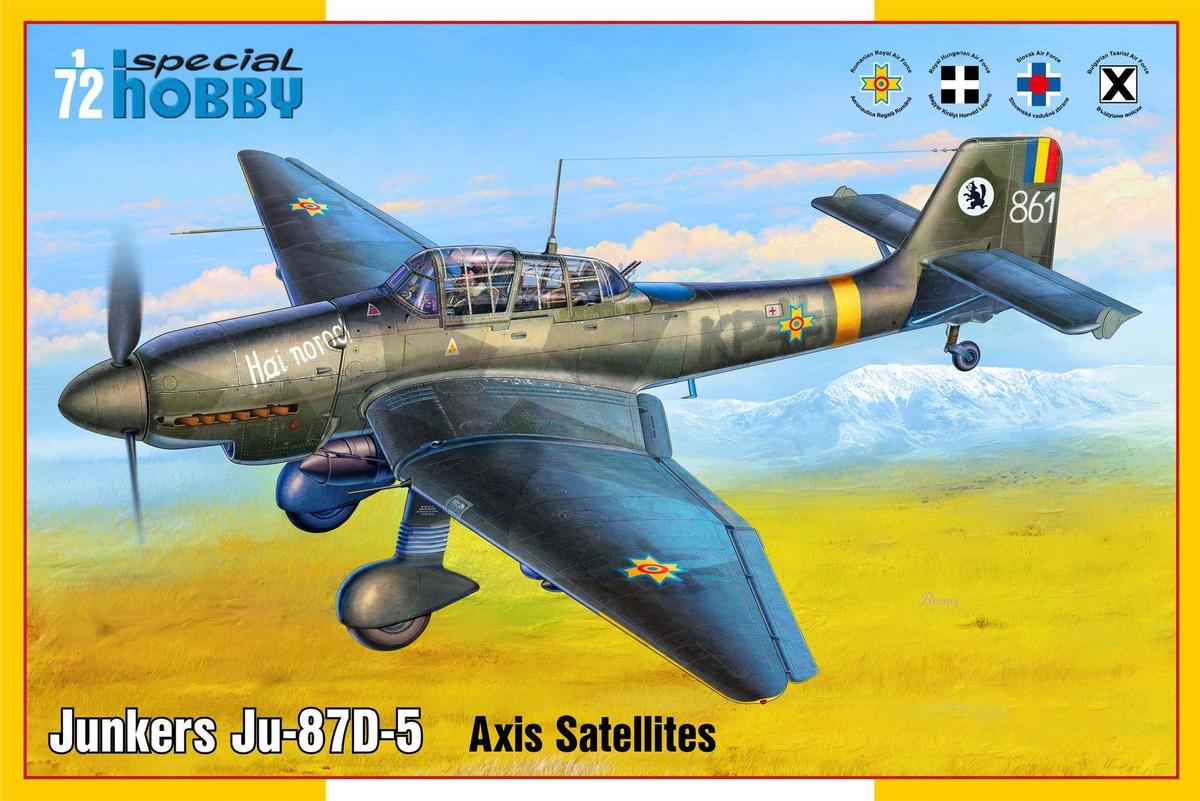 1/72 Junkers Ju-87D-5 ‘Axis Satellites’
Academy’s top-quality styrene injected parts of their Junkers Ju 87G-2 kit has been joined now by Special Hobby’s own new conversion parts enabling the modeller to build the original kit in the D-5 variety. On top of that, we have to say that our parts also tackle a few of the trouble spots the Academy kit unfortunately possesses. This version actually was the final one of all Stuka bomber versions and was operated not just by the Luftwaffe but by other German allies too. So, the decal sheet and colour schemes included in the kit portray machines flown in Rumania, Hungary, Slovakia and Bulgaria. The Rumanian machine was adorned with lettering on either side of the fuselage while the Hungarian one carries a name. 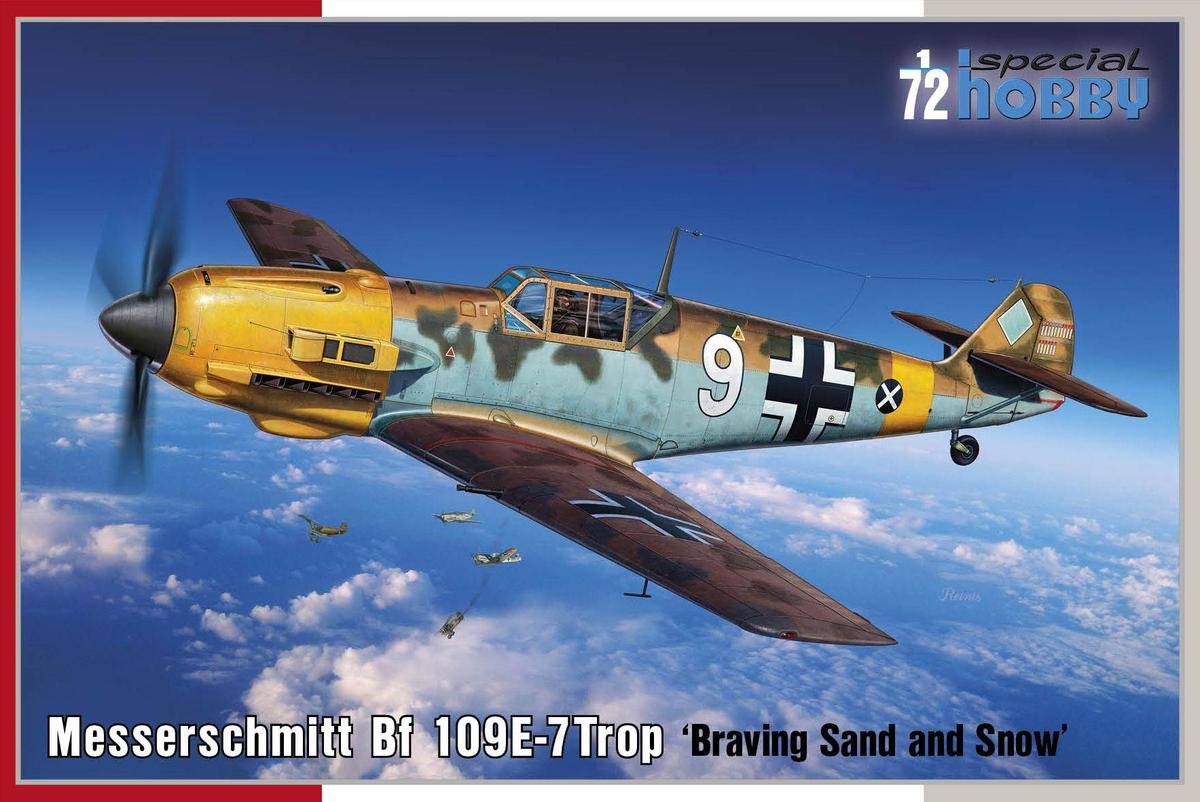 1/72 Messerschmitt Bf 109E-7Trop ‘Braving Sand and Snow’
If you hear ‘Messerschmitt Bf 109’ it no doubt is a synonym for a fighter aeroplane. And what an aeroplane the one-oh-nine was. In active service from 1936 until 1954 in a number of countries, in front line duty since the Spanish Civil War and remained till the end of the Second World War, and some machines even in a couple of post-war years. The so-called Emil, which name stands for the 109 E version, was the first version of the type to have been equipped with the DB601 powerplant. It is arguably unmistakably connected with the outbreak of the hostilities, the attack on Poland, Western Europe and Scandinavia. The Battle of Britain was the pinnacle of Emil’s career though, and the type went on to serve with no less success also over the Balkans, Africa and Malta. Until 1941, alongside the most iconic aircraft of all times, the Spitfire, the Emil was the very best the fighter pilots of those time could fly.
Our model brings no less than four schemes of machines flying over north Africa. Various schemes have been picked up to show how colourful and eye-catching the machines in desert colour might be. And to make the matter even more interesting to the modeller, one of the schemes features the machine with one of its wings replaced with a new one in European style colours. The parts of the kit are laid out on two styrene sprues and a small one with clear parts. You can build the model with the engine cowl and wing gun panels removed, with the wing flaps down and slats in the open position.

superbly accurate and very finely detailed model
easy assembly
can be built with the engine cowl removed
can be displayed with open slats and flaps down
accurately designed decals featuring markings for four machines, including a full set of stencils
paint masks for wheels and clear parts are available too
wide range of separate detail sets available