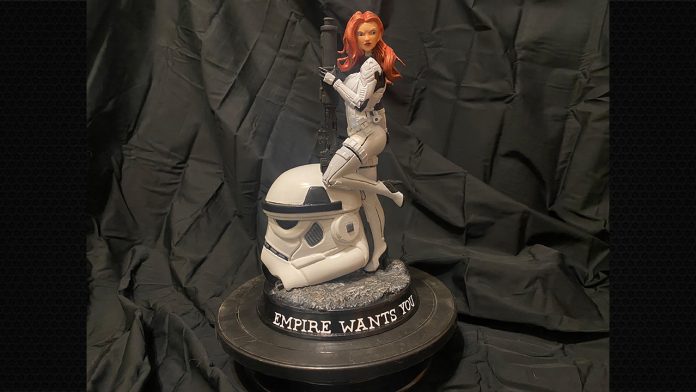 “Propaganda”, it’s everywhere in the Universe including recruiting for the Empire. This Stormtrooper Pin-Up girl was printed on both an Ender 3 V2 and Voxelab Aquila FDM at 100%. layer height of .12 mm, with 9 parts. Roughly 150 print hours.

The figure stands about 10 inches tall. Painted with Vallejo Air and Tamiya acrylics using airbrush and hand brush. The base was covered in different washes and dry brushed. I wanted to keep her with the traditional Stormtrooper look. Face and hair were all hand-painted using a combination of Vallejo Air, and AK acrylics. Hair was painted mixing 4 drops of gold, and 2 drops of red, then after the base color, mixing 5 drops of gold to 1 drop of red for the highlights, adding gold until the highlighting was done. Several clear coats were applied until a nice shine was achieved. The lettering was applied to the base to complete the build.

Thank you for looking, and a big thank you to HLI for having such a great community.