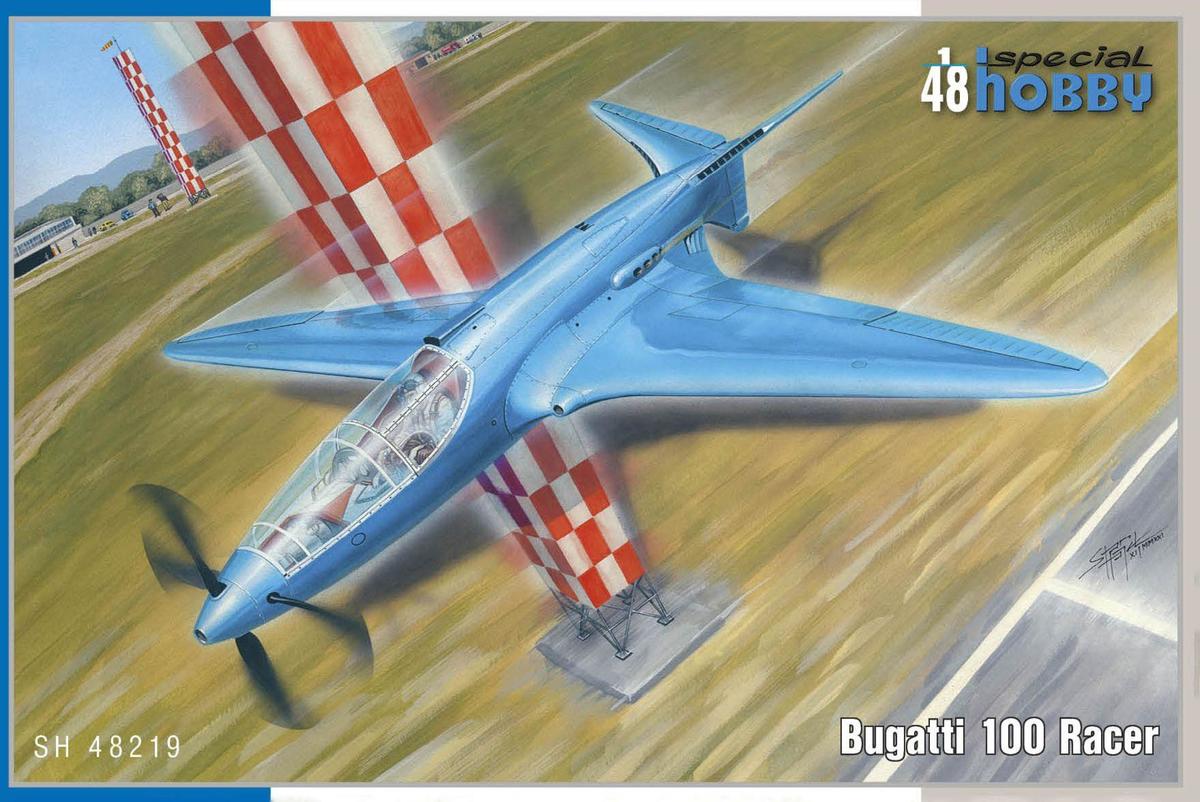 Bugatti 100 Racer 1/48
In the pre-war years, Ettore Bugatti, a very well known racing car designer, took the opportunity and decided to turn his attention to aviation too and come with a concept of a racing aeroplane which was to win the then rather popular Deutsch de la Muerthe races. At first, the plane was to be fitted with just one engine, this was later reconsidered and two powerplants were used, placed asymmetricaly in the sleek fuselage, each one driving its propeller – these were two, counterrotating. In this shape, the plane was even supposed to break the world speed record. The aeroplane was finished and prepared just before the war broke out, but had to be put out of the sight of the advancing German army. As of now, the Bugatti prototype is placed on display at the EAA Aviation Museum in the USA.
This kit contains two styrene sprues and a single one with clear injected canopy. As the machine was in blue overall scheme with no markings at all, the kit has got no decal sheet. The schemes are two though, the other one representing a fictitious scheme. 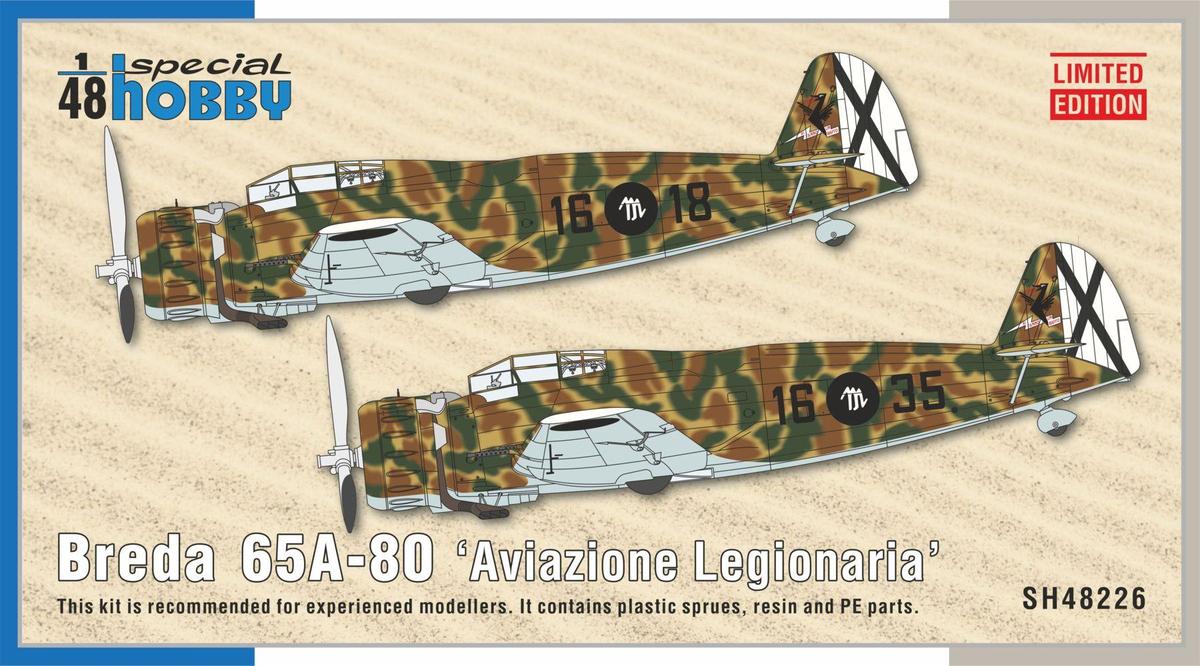 Breda 65A-80 ‘Aviazione Legionaria’ 1/48
The ground-attack Breda 65 aircraft, both of the single seat and two seat variety, had been designed yet berofe the war broke out. The type was manufactured in two main versions, differing by the type of the power plant used and the span of the wings. The Italian Air Force decided to test the Bredas in real war conditions and sent the to the Aviazione Legionaria, the Italian Expeditionary Corps deployed to the Civil War in Spain.
Our model of the single-place variety, wearing the markings of the Aviazione Legionatia, is being offered now in a limited quantity only. The kit contains three styrene sprues, one with clear parts, resin details and a fret of etches. The decal sheet covers two machines with standard, black and white markings of the Italian Expeditionary Forces in Spain.

– Limited edition only
– Interesting markings
– The kit comes with detailed resin parts and a large fret of etches. 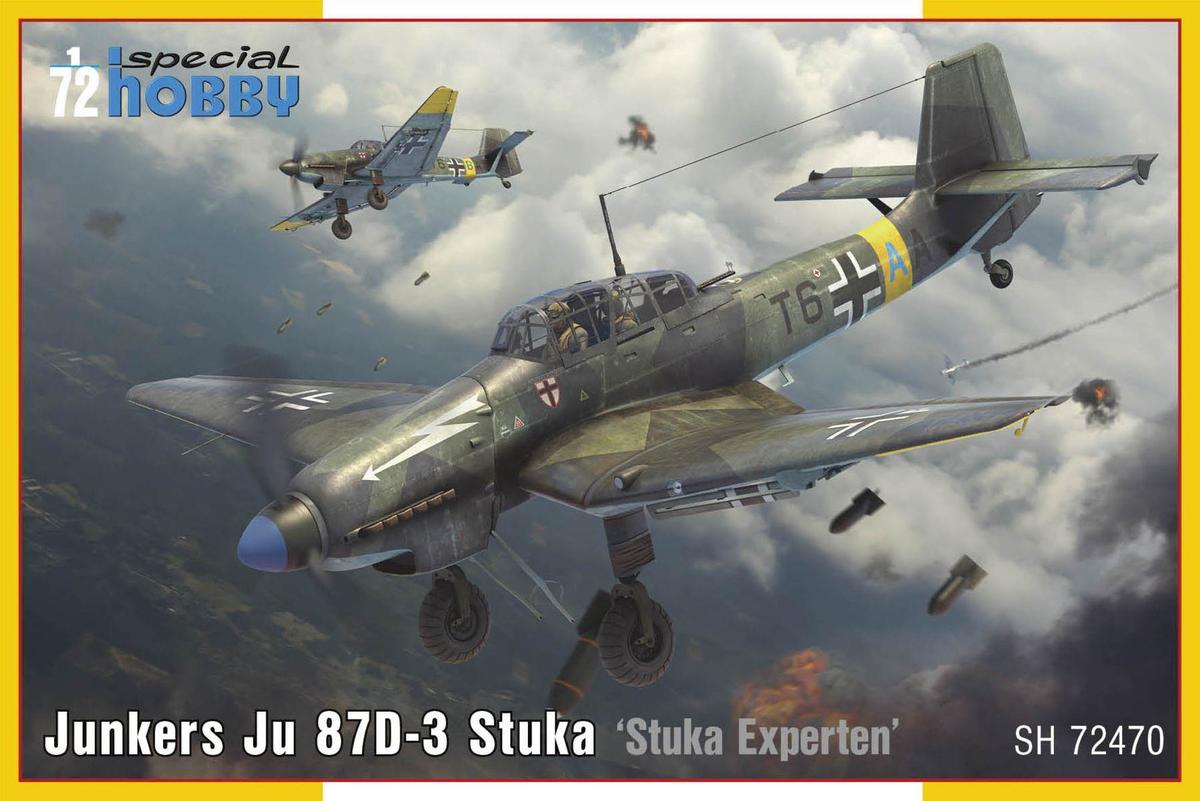 Junkers Ju 87D-3 Stuka ‘Stuka Experten’ 1/72
The Junkers Ju 87B/R Stuka was, and mainly on the Eastern Front, a highly importnant and widely used aeroplane. With the increasing might of the enemy air forces, the Stuka design simply had to constantly undergo continuous improvemetns. So, the Ju 87D variety got into the production. Up until the D-3 type, the wing was of the standard span, but then it changed and got longer span, starting with the D-5 type.
Our Junkers Ju 87D-3 is based on the G-1 model made by Academy and comes with our new injected styrene sprue with both conversion and correction parts. Etches as well as a sheet of decals are also included. The latter offers markings for three machines flown by Luftwaffe Experten, Iron Cross bearers. 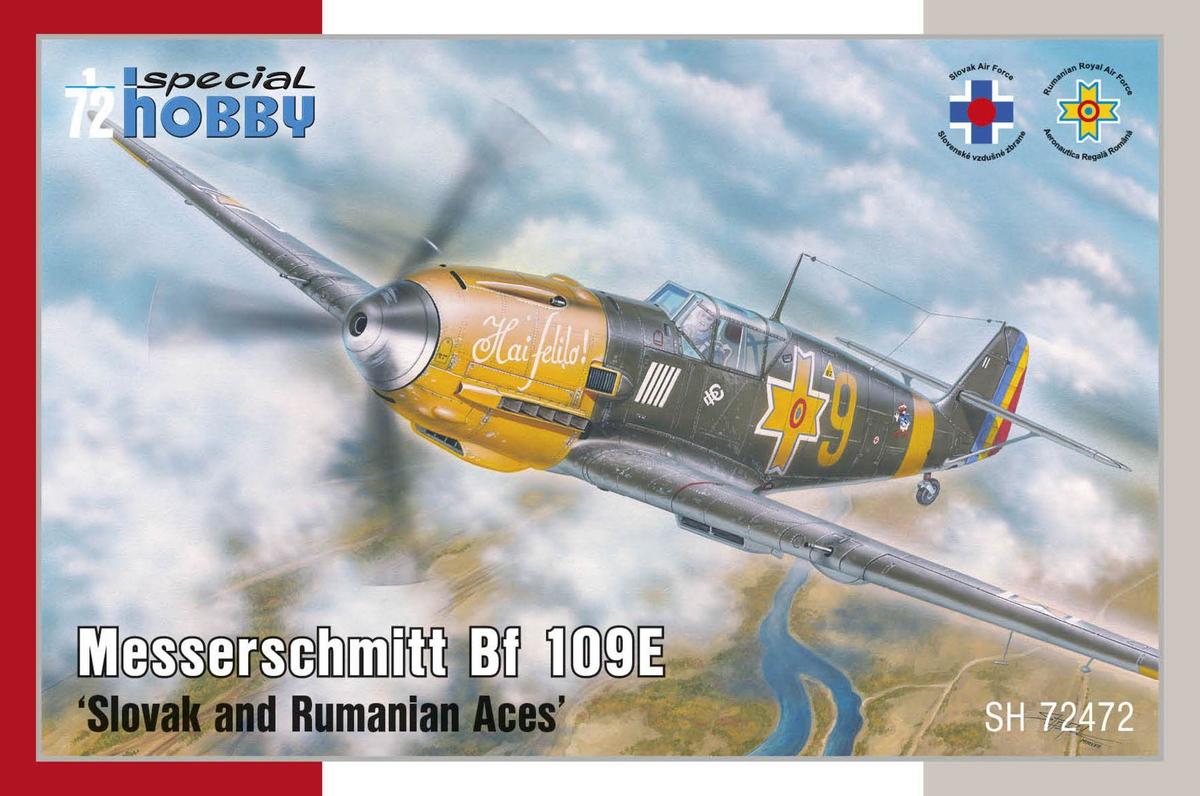 Messerschmitt Bf 109E ‘Slovak and Rumanian Aces’ 1/72
In 1939, the Messerschmitt Bf 109E was arguably the very best fighter aeroplane in the world. And so, many air forces in Europe showed their interest to acquire the type to their inventory. And among the first foreign countries able to do so was Rumania, mainly because of the oil they were mining in
Ploesti. On the other hand, one of the last countries to get the aircraft was the Slovak State, despite being a close ally to Germany at the time. Both these countries, Slovakia and Rumania, put their Emils to military actions on the Eastern Front alongside the German Luftwaffe. And some of their pilots rose to acedom flying these tiny and nimble fighters.
The top-notch model of the Messerstchmitt Bf 109E is here in yet one more reboxing offering decals for two Slovak-born ace pilots and two from Rumania – and these latter ones are also those with most eye-catching machines in the box. The lifes and the fate of the pilots are also described in the four colour schemes.
– Highly interesting and colourful camouflage schemes
– Each of the machines was flown by an attractive figure with interesting life story
– Also available: paint mask sets, pilot figure sets and a wide range of resin and printed accessories 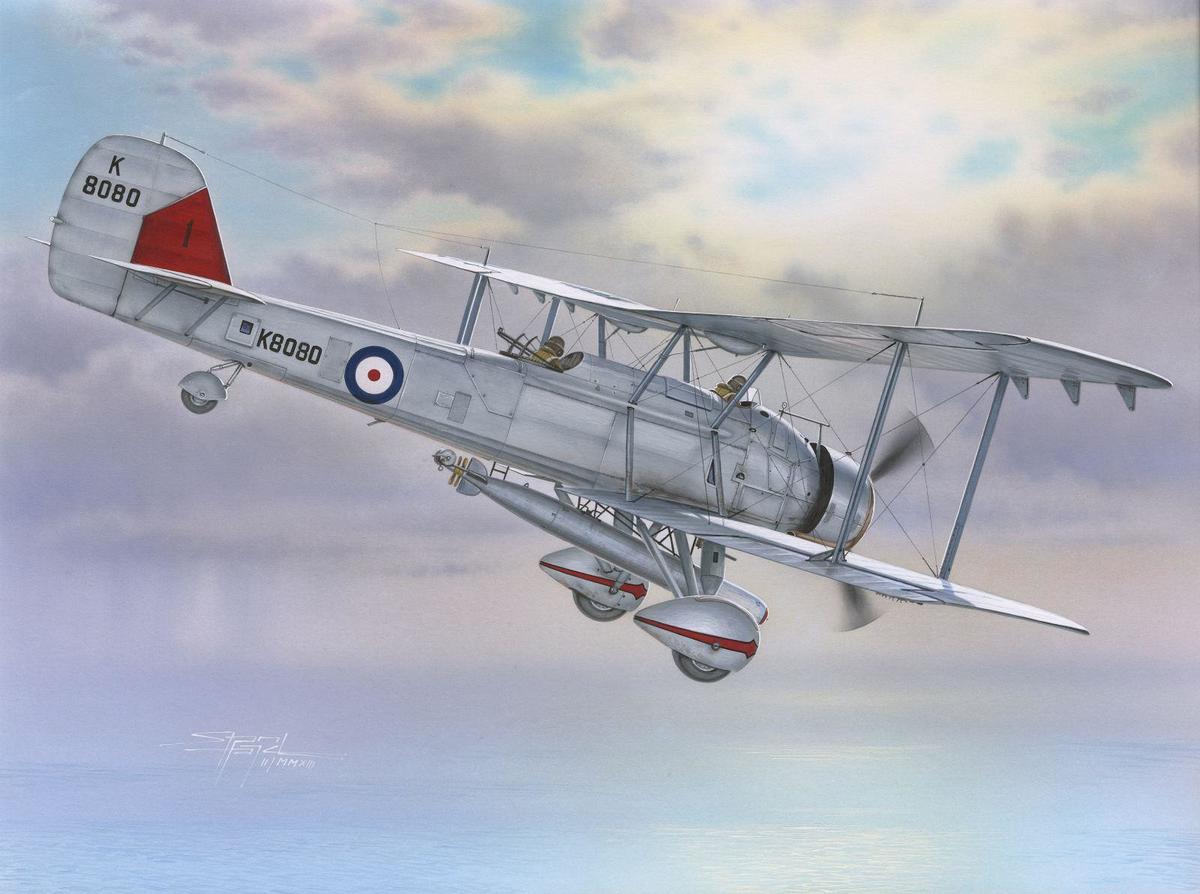 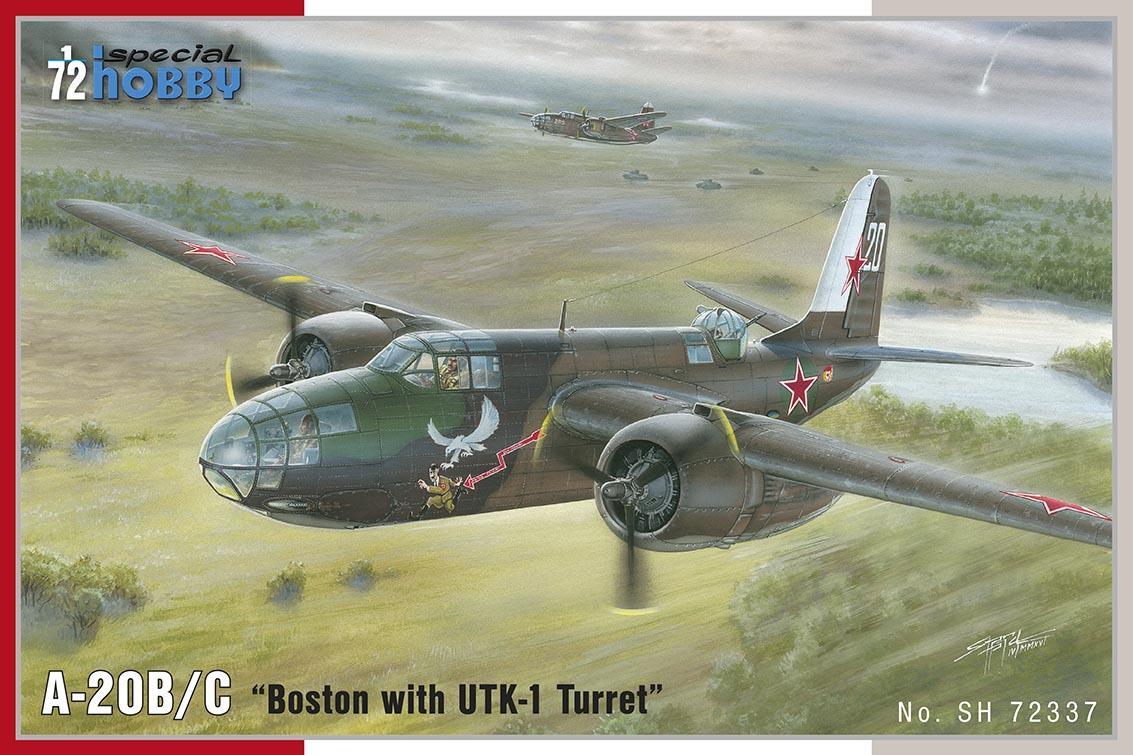 A-20B/C Boston with UTK-1 Turret 1/72
The A-20 Boston was an American bomber plane, in fact one of the most successful military type of the war. The VVS and AVMF, or Soviet Air Forces and Naval Aviation, acquired almost three thousands of this aircraft, making them the second largest users of the type after the US Army Air Force. In the Soviet Union, it soon became clear that during the harsh winter conditions on the East Front, the rear gunners suffered far too much from the elements and also that the low-calibre machine gun was not up-to the standards for the battle field. Therefore, it was decided to equip the Soviet A-20 bombers with UTK-1 type turrets and sometimes also with different armament. The new turret changed the side profile of the plane rather dramatically.

In our reissue of the Soviet A-20 bomber, the decal sheet caters for two machines, one of which carried White 20 number and was flown with its original US camouflage scheme with repairs done using local-made paints and was also embellished with a caricature of the Nazi fuhrer Adolf Hitler. The other plane was Yellow 5 flying in British camouflage also with paint scheme repairs. 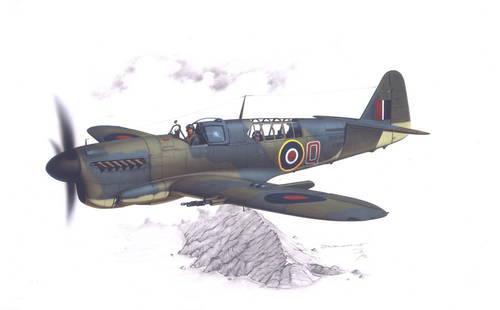 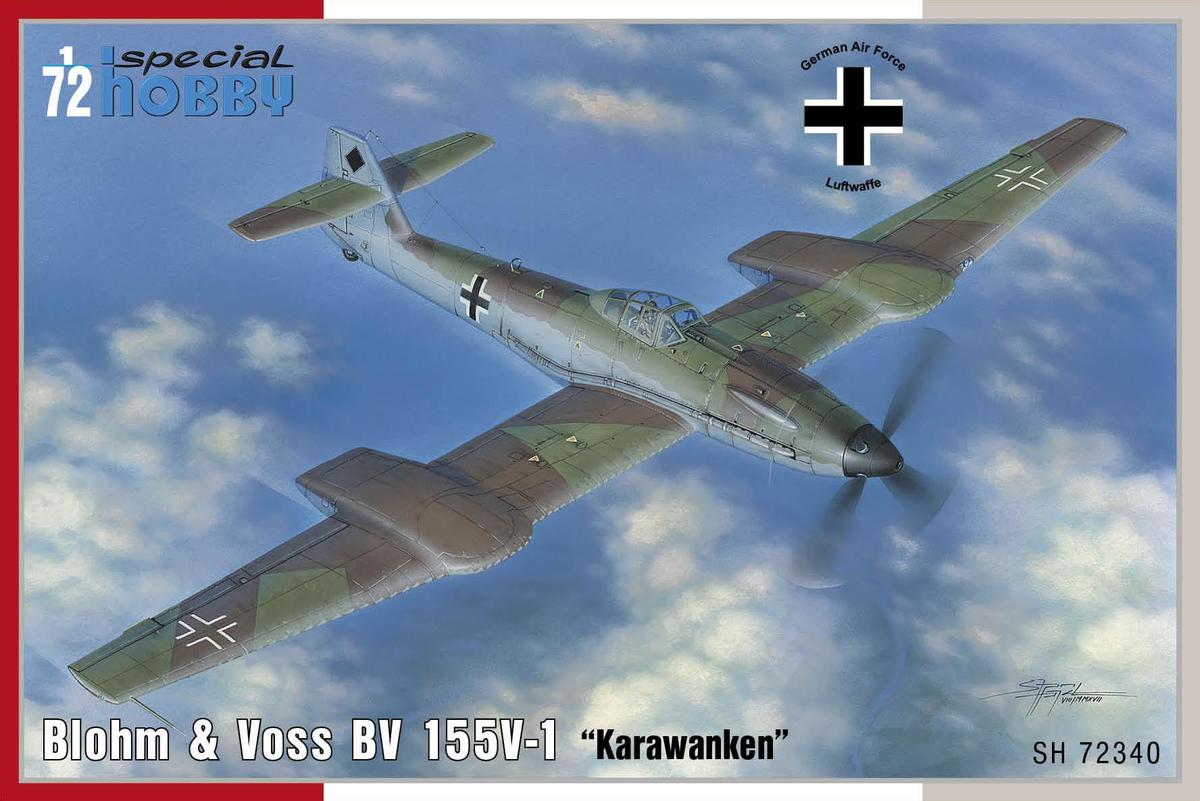 Blohm & Voss BV 155V-1 1/72
The Blohm Voss BV 155B was supposed to become just that weapon to stop the new American B-29 high altitude bombers. However, these magnificent machines were sent to the Pacific area and the development of the BV 155B was not brought to a successful finish. The development had really been rather complicated, originally taking place at Messerschmitt facility as the Me 155, originally designed as a naval fighter for theplanned but never finished Graf Zeppelin carrier. As the requirements of the RLM changed with time, the type was also redesigned to perform as a high altitude machine, the Me155B. The Messerschmitt development team was overburden with several other projects, so the RLM decided to transfer the project work to Blohm Voss, where, however, the Blohm Voss‘ chief designer Richard Voght considered the project to be quite bad and eventually redesigned it completely. The type’s designation changed as well to the BV155, and the new plane was much larger with a long span wing. A four-bladed propeller was driven by a turbo-charged DB 603U engine, with engine radiators hung under the wing. The first BV155V-1 made its maiden flight on 1 September 1944, quipped with a pressurised cockpit and a Rb 50/30 camera behind the pilot’s seat. The planned armament was to consist of a 30mm MK108 cannon in the propeller shaft and two 20mm MG151/20 cannon in the wings. Several problems occured during the first flights, although the team was able to tacke some of them eventually. Another two prototypes, the V- 2 and V-3 had also been partially built. Richard Voght considered also the BV155C, a version which was to have its radiator in the forward fuselage. The advancing British troops brought an end to all these plans when they seized the Blohm Voss factory and also Hamburg – Finkerwerder airfield. The RAF supposedly test-flown the BV155, at least an inventory number was assigned to the type. At first, the Bv155 was sent to the UK, consequently over the pond to the USA. Nowadays, the already incomplete machine is stored at theNational Air and Space Museum depository.
The model of this unique high altitude fighter prototype was already produced by our team and is no longer available. The model that we are going to offer you now is a completely new one, and some of its components are produced using metal moulds. The kit comes on three grey styrene sprues, one sprue sith clear parts and also contains two nicely detailed resin items. The decal sheet was expertly printed by Italian Cartograf. 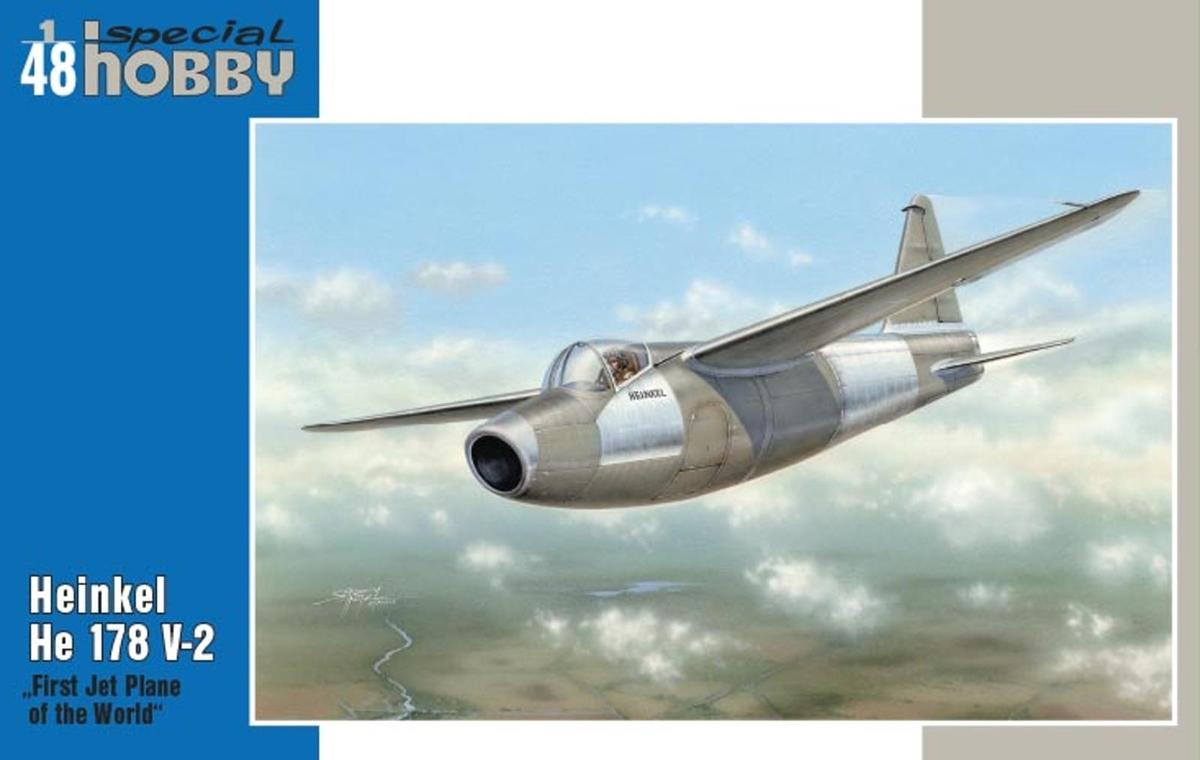