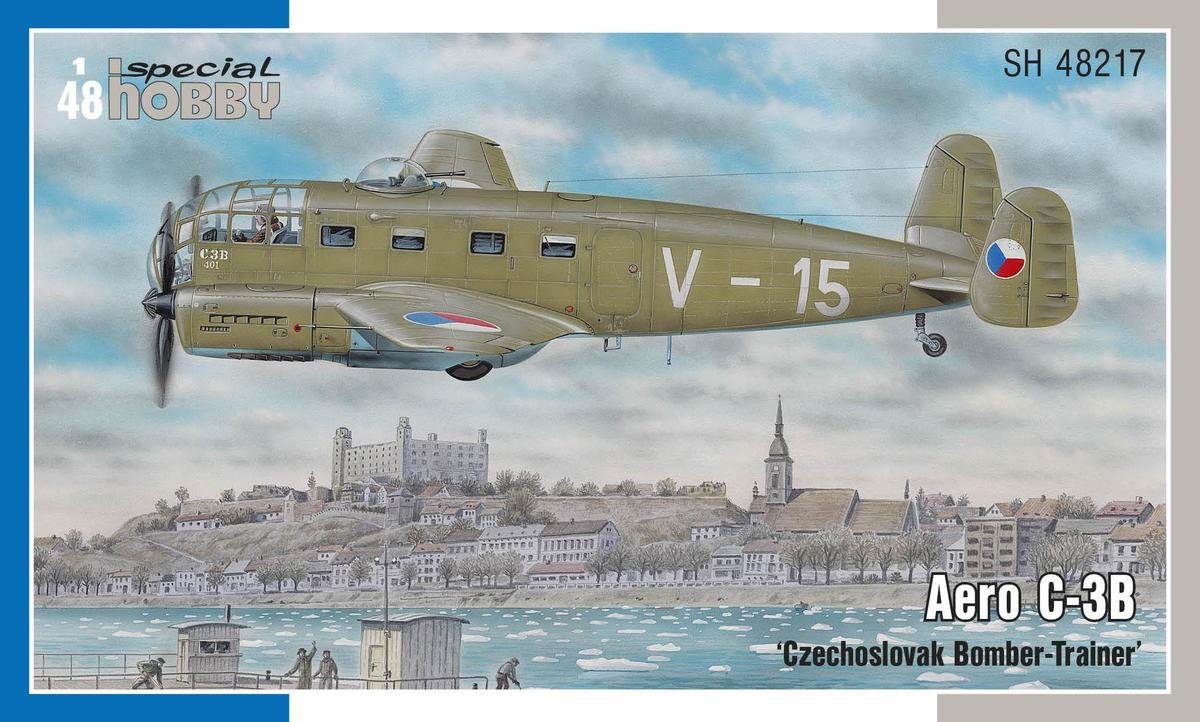 Aero C-3B ‘Czechoslovak Bomber-Trainer’ 1/48
The Siebel Si 204A and Si 204D were the transport training versions of the twin-engined aircraft designed and built for the Lufthansa and, mainly, for the Luftwaffe. A bomber trainer version was also built during the war which was capable of taking night bombing missions, too. Known as the Si 204E, two prototype machines were built and a small batch designated Si 204E-0. These machines were used for nocturnal bombing missions, among other also in Slovakia to suppress the Slovak national uprising. After the war, the production of the type went on in Czechoslovakia, where the type got the Aero C-3B military designation, and they meant much more for the fledgling air force than they did for Germans. At first, they were meant to assist the training of the air crews. The February 1948 pro-communist coup brought about the virtual impossibility of acquiring new, state of the art aircraft from the West as well as it meant the end of spare parts supplies for the Mosquito and other aircraft already in Czech service. The communist regime also began to build an oversized army and air force in truly megalomaniac fashion common for other communist block countries, too. What they were not able to do, however, was to produce modern aircraft, nor was the Soviet Union able to deliver such equipment to them. So the outdated Siebels were to stay in service as a mainstay of the bomber force well until 1955 when Soviet jet bombers eventually arrived.
The model kit consists of as many as nine grey styrene sprues, two clear plastic sprues and a sheet of decals covering three Czechoslovak Air Force machines.

– a very attractive version
– both the interior and exterior offer nice levels of detail
– sets and figures for the model are also available, separately 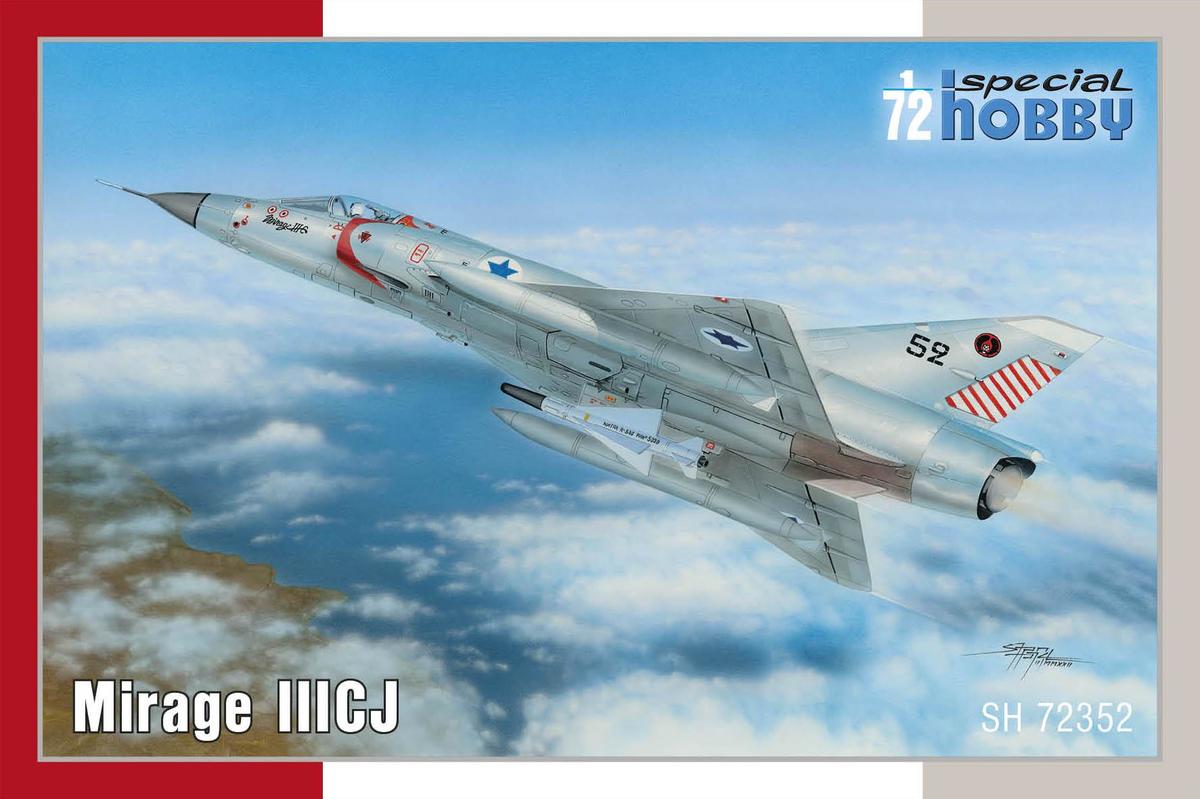 Mirage IIIC 1/72
The Mirage IIICJ became the symbol of the Israeli air superiority during the wars with the neighbouring Arab countries. The Mach Two, high performance, delta wing fighter aeroplanes were produced by French Dassault, but the Israeli CJ version differed from the airframes built for the French military by not being fitted with the rocket booster motor. The Israeli Mirages took part in the War over Water, Six Day War, Attrition War and the Yom Kippur War as well as several more minor clashes. In its air superiority role, the Mirage did very well indeed, and many of their pilots quickly became aces.
As many as seven styrene sprues plus one with clear parts in the kit are joined by a decal sheet with markings for four IAF machines with the earlier powerplant, the Atar 9B jet engine.

– Superbly detailed model
– Colourful and eye-catching schemes and decals
– And also a ‘Black’ Mirage completely covered in soot from the explosion of an Arab jet that it had just shot down.
– Pre-cut masks also available, resin detail sets being developed at the moment 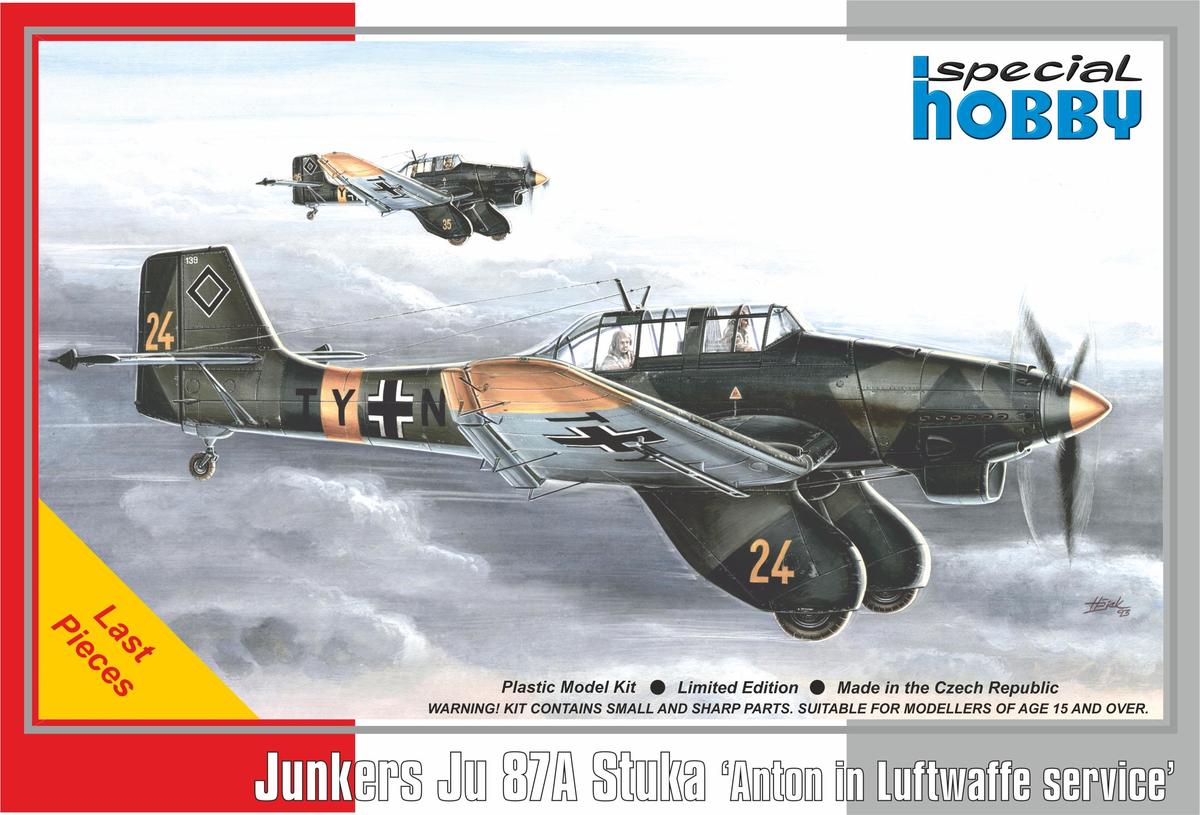 Ju 87A Stuka „Anton in Luftwaffe service“ 1/72
The Junkers Ju 87A Stuka is the first Stuka version in serial production. The first pieces were part of the Legion Kondor in the Spanish civil war. During WWII the Ju 87A served as training planes for Luftwaffe pilots until 1944.
The kit contains two frames of grey plastic, injected clear parts, PE parts and PUR parts. There are decals for three German planes.
This kit is in limited stock and is only available on our website www.specialhobby.eu.