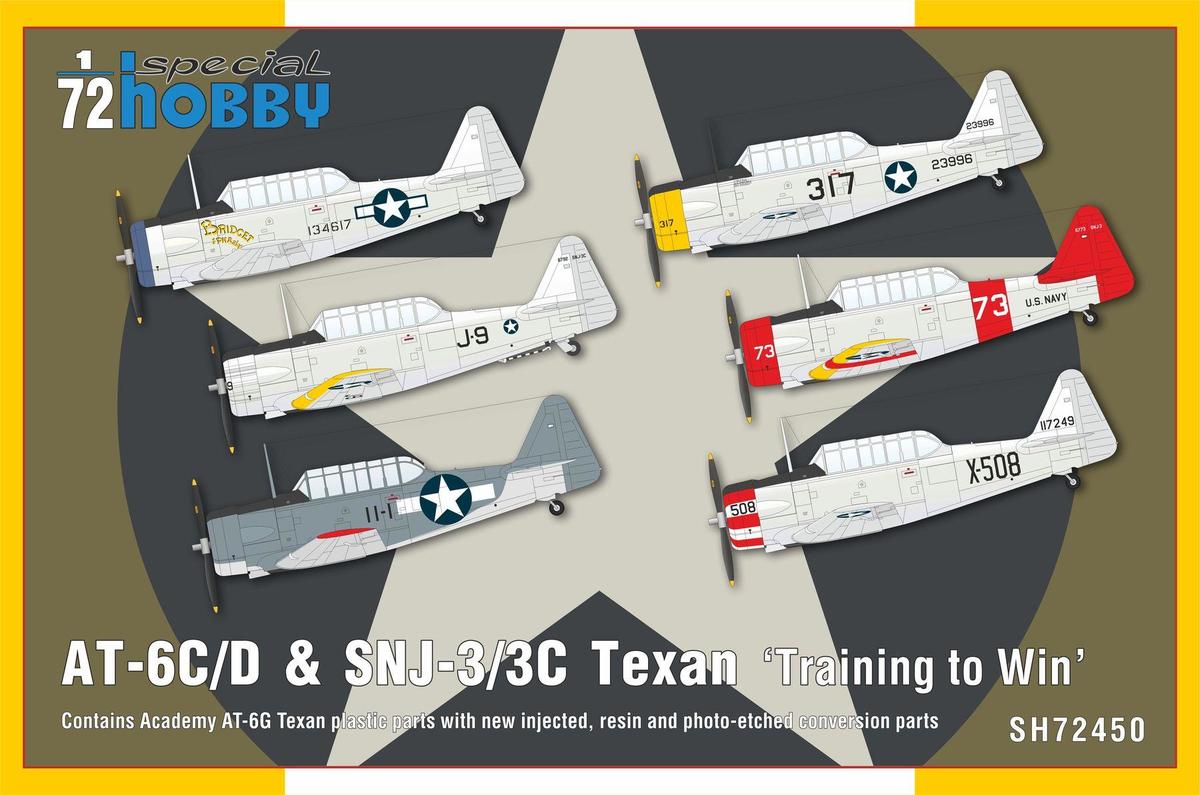 1/72 AT-6C/D & SNJ-3/3C Texan ‘Training to Win’
The North American, founded in the 1930s, is famous mostly for designing and producing the P-51 Mustang fighter aeroplane. The company, however, made a name for itself with its first achievement, the single-engine, trainer aeroplane, originally known as the NA-16 and to be developed further and eventualy becoming an all-metal machine with retractable undercarriage. The type was produced in many various versions throughout the war as well as in the post-war years. The USAAF designated the type AT-6 Texan while for the US Navy and Marines, it was known as the SNJ. The type found its way across the world during the war as well as when it had ended. For the Commonwealth, the Texan was produced as the Harvard Mk.I through to Mk.IV. In Canada, the Noorduyn company built under licence rights the Harvard Mk.IIB airframes. The various Texan versions differed mainly by their armament, equipment and the shape and framing of the canopy. Many Allied airmen, coming from all around the world, and even from occupied Europe, got their wings in the cockpit of this North American’s workhorse.
The Academy‘s post-war AT-6G version comes in our re-boxing now joined by a new clear parts sprue and a set of resin parts enabling it to be finished in the iconic war-time trainer version. 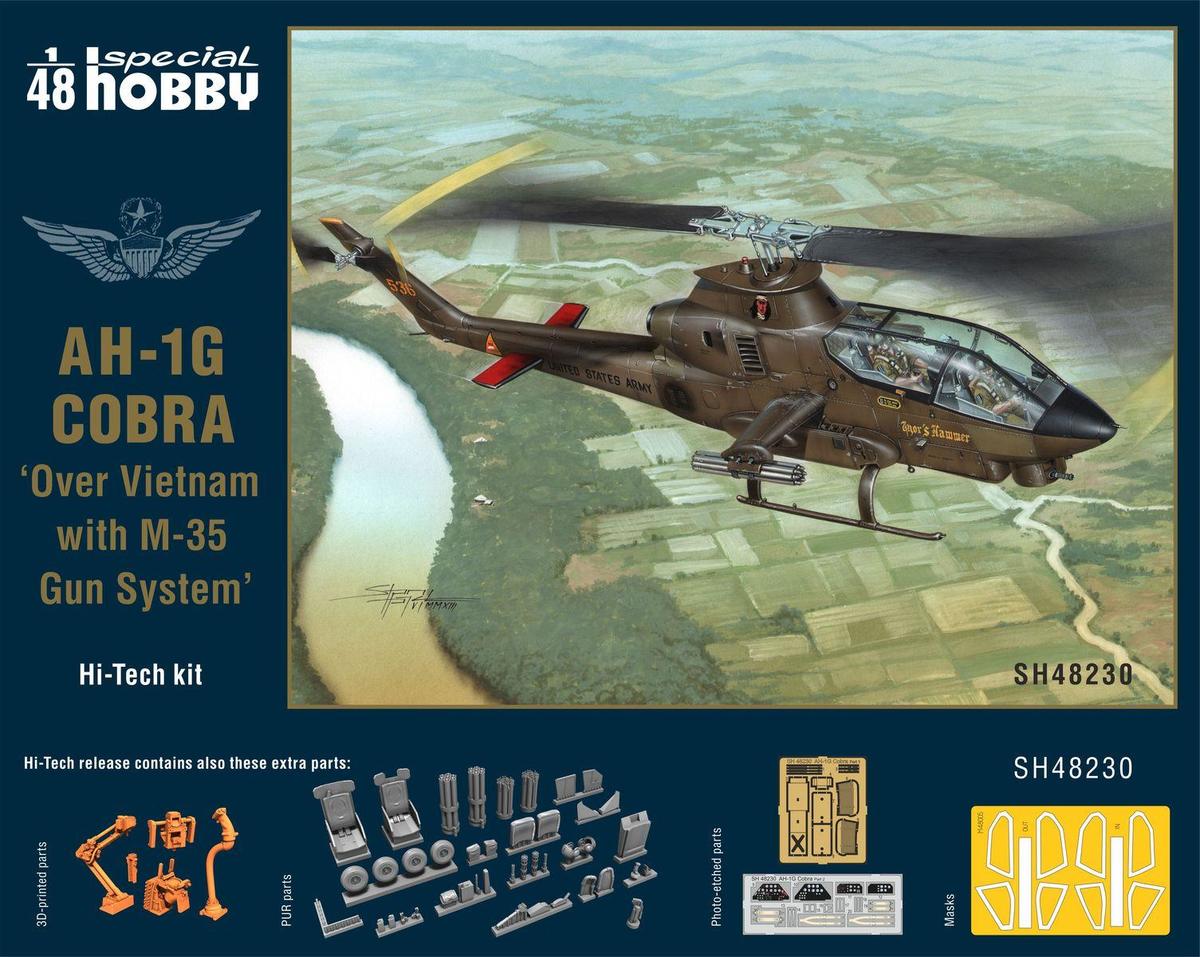 1/48 AH-1G Cobra ‘Over Vietnam with M-35 Gun System’ Hi-Tech Kit
The AH-1G Cobra was the world’s first helicopter primarily designed and developed for the ground attack role. Its first combat deployment took place in Vietnam in 1967. The initial batches differed from the later ones by having their tail rotor on the port side of the fin. The AH-1G became the first member of the quite wide family of attack helicopters of which the latest versions keep flying until these days. The AH-1G fought in the Vietnam war, saw service both in the USA and Western Europe, and were also exported to several other countries – the G version went to Spanish Navy and the Israeli Air Force.
The superb quality styrene parts of the AH-1G Cobra model now come with a large amount of resin detail parts, photo etches and 3D-printed items which all extensively raise the levels of detail of the original kit, both in the cockpit and on the outside of the airframe, making the model a real gem in your collection and deserving the Hi-Tech title. The kit also contains pre-cut inside/outside canopy masks. The decal sheet offers markings for four various schemes of Vietnam-based Cobras armed with the M-35 cannon system. All of these machines wear individual names, two of them also sport a shark mouth on their fuselage. 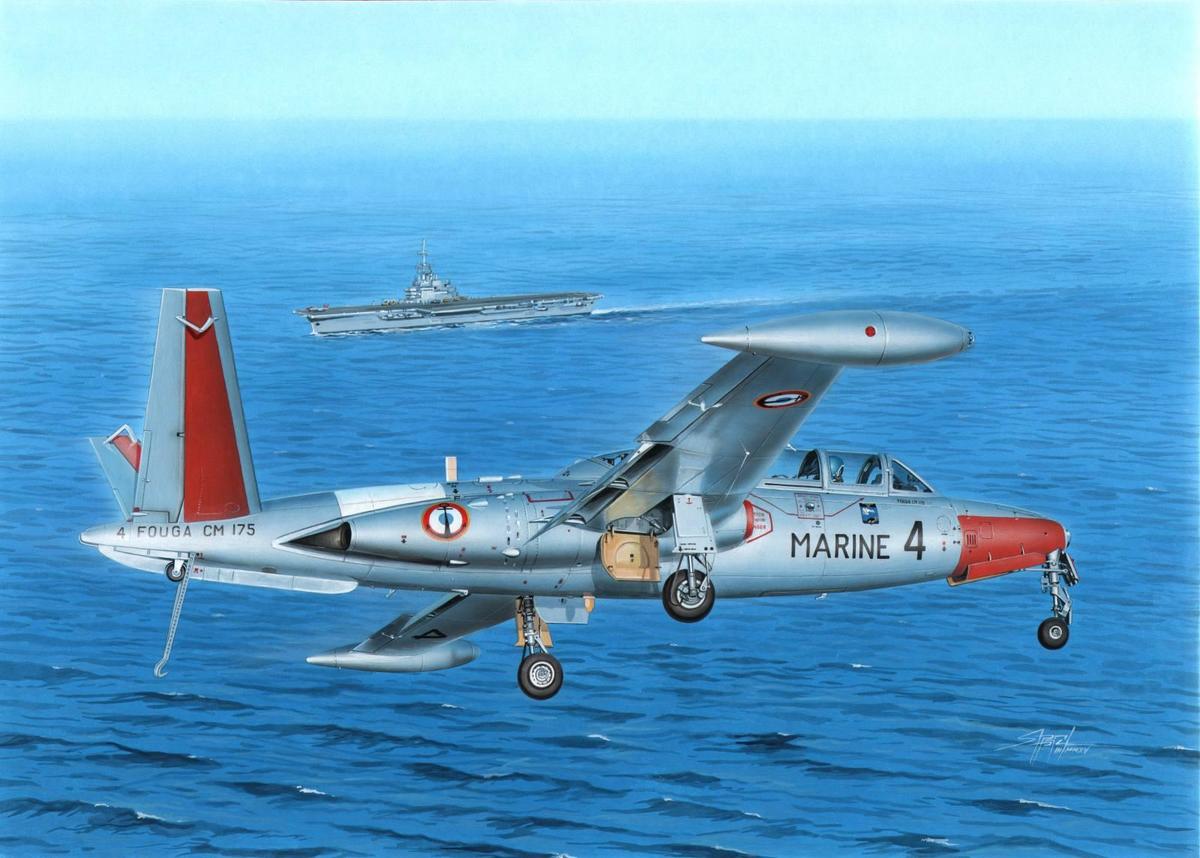 1/72 Fouga CM-175 Zéphyr
The Fouga Magister is among the most widely used jet trainer aeroplanes in the world. Its navalized variety, however, was operated solely by the French naval aviation, the Aeronavale. The machine, renamed the Zephyr, sported reinforced construction, special equipment for over seas operations, a different nose section and rearwards opening canopies of the crew. The Zephyr served, both from land bases and carrier decks, for long three and a half decades.
Our model, in the box with a superb painting depicting a Zephyr just before landing on a carrier, comes on four grey styrene sprues and one with clear parts. The decals cater for one machine in its early Aeronavale scheme and three later ones.