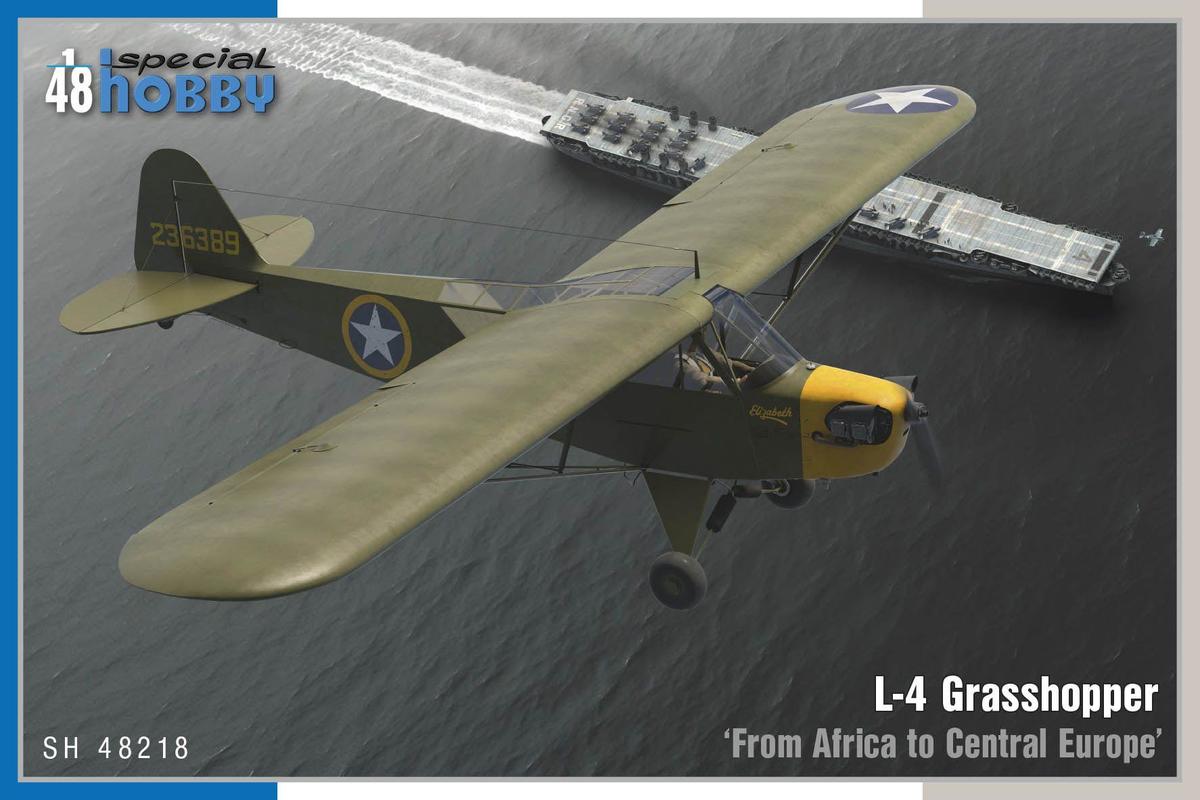 L-4 Grasshopper ‘From Africa to Central Europe’ 1/48
It quite soon became clear to the US military, as well as the British RAF, that the rather large and complicated types such as the O-47 or Lysander which had been designed in the pre-war days for army co-operation, close support, artillery observation and liaison roles were in fact ill-suited for real operations. Lighter types with the ability of very short take offs and landings proved much more successful. And arguably the most famous of all types of this category is the L-4 Grasshopper, developed from the originally civilian J-3 Cub which had done really well during US Army pre-war exercises.
The first of our boxings captures the Grasshoppers’ combat journey beginning with the Operation Torch, the Allied landing in Africa, through the landing in Italy, Normandy, to the US airfields in western Bohemia, Czechoslovakia, where the Grasshoppers ended their WW2 combat service.
Two styrene sprues are joined by one clear parts sprue and a decal sheet with markings for four airframes.
– There has been no new and fine L-4 Grasshopper kit for more than five decades.
– Interesting colour schemes
– Etches included in the kit
– Pre-cut masks available separately 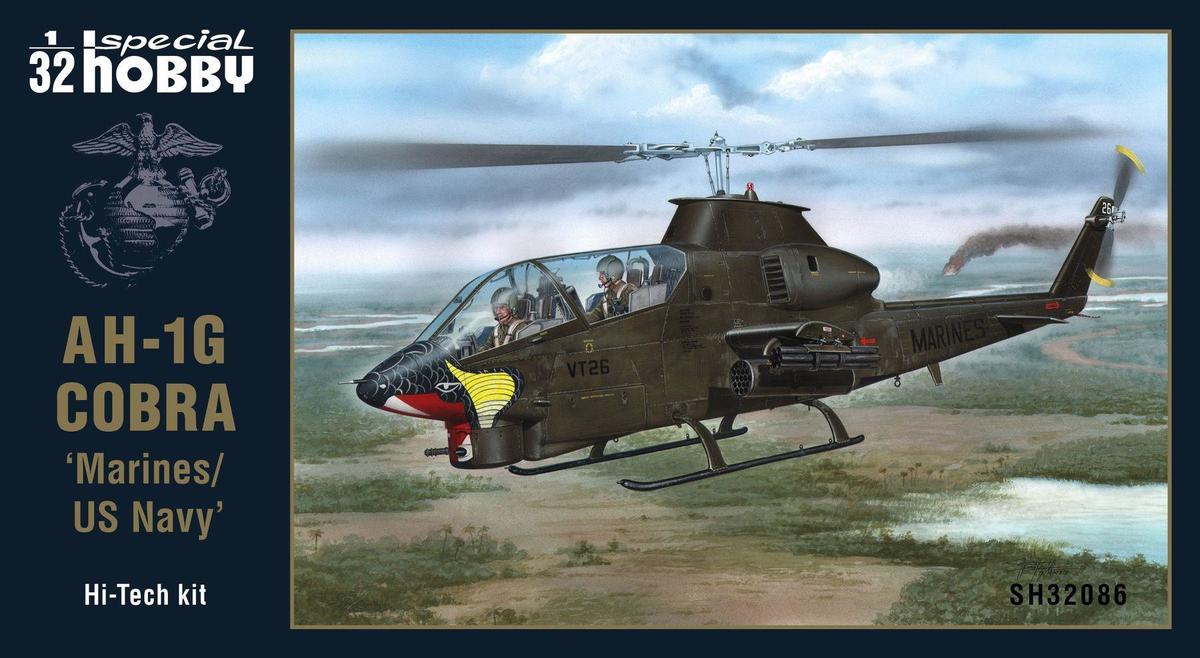 AH-1G Cobra ‘Marines/US Navy’ Hi-Tech Kit 1/32
The high-quality ICM AH-1G Cobra release comes now to you joined by a number of resin parts, etches and parts made by direct 3D print. All these extras give both the cockpit and exterior of the kit much more detail, resulting in a really top-notch release which deserves nothing but the Hi-Tech label. The kit also contains a set of pre-cut masks which is designed to be applied on the glazing both on the inside and outside. The decals cater for three Marine options and one flown by the US Navy. Two of the machines took part in the Vietnam War.
– Superb resin parts, 3D-printed details, masks, photo-etches plus pre-painted etches, all this galore joins the styrene items of the original ICM AH-1G kit
– Decals for three Marines and one US Navy machines, servicing stencils included
– Interesting colour schemes. 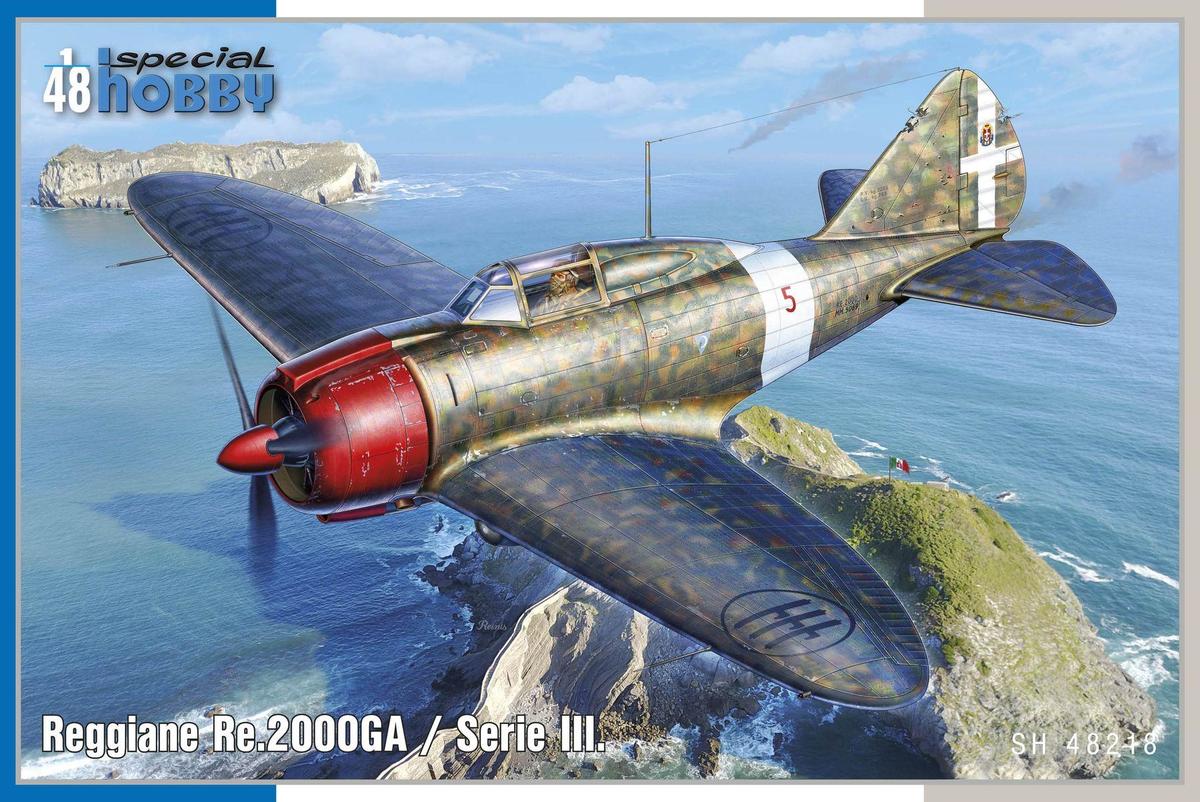 Reggiane Re.2000GA / Serie III. 1/48
The Reggiane Re.2000 took part in the standard Italian fighter type competition which was taking place almost in the eve of the war. Even though the type offered high performance, it was not chosen for military use and was released for export. A few examples did enter a trial service with the Regia Aeronautica though, mainly in dangerous missions against the island of Malta.
Our kit consists of four styrene sprues and one clear parts sprue. The GA/Serie III version featured a non-glazed top rear section behind the cockpit. The decal sheet offers markings for four schemes bearing various colours on their noses.
– A Second World War Italian fighter type
– Three colour schemes wearing interesting Italian mottled camouflage
– Separately available – resin sets and pre-cut masks. 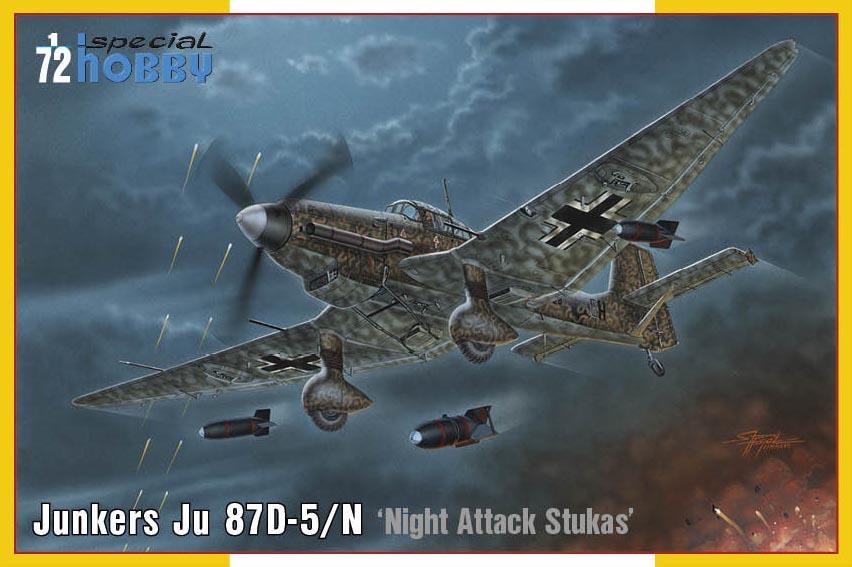 Junkers Ju 87D-5/N/D-8 ‘Night Attack Stukas’ 1/72
The top-notch plastic parts of Academy’s Junkers Ju 87G-2 are now joined by our own styrene, resin and photo-etched conversion parts which all makes it possible to make the Junkers Ju 87 in the rare D-5/N/D-8 versions. And along all that, the conversion parts also take care of the very few issues the original kit has. These D-5/N/D-8 airfames were almost the last ones of the Stuka family to be flown in the bomber role aand were operated from 1943 until the end of the war. They saw service not only with the Luftwafe, a couple of Axis states operated them, too. Due to the air superiority of the Allies though, these Stukas were most often used at night in ground-attack and bombing missions and as the dive brakes were not needed for such actions, these were often removed and ight type exhausts with flame dampers were introduced on these versions.
The marking schemes and defals of this limited-quantity model kit caters for four Luftwaffe options fitted with two styles of night exhausts made of resin.-