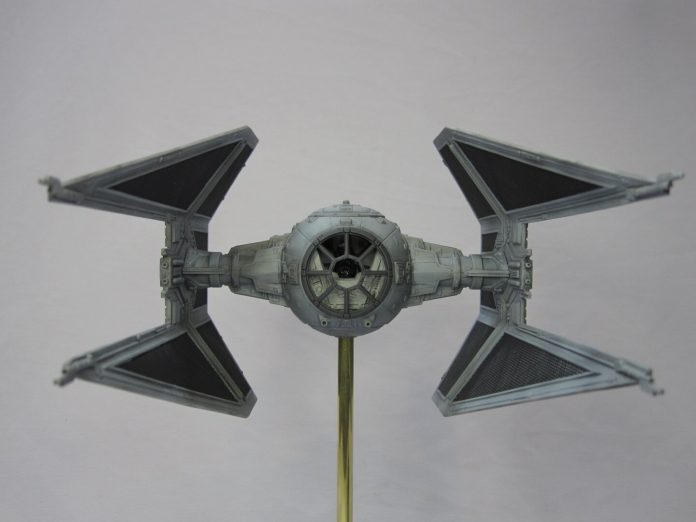 This is my buildup of the TIE Interceptor for the Hobby Link International 2022 Star Wars Group Build.

My initial plan was to build the original MPC Interceptor Kit (MPC/Ertl No. 8931) out of the box, but felt frustrated with the lack of details and raised panel lines on the main bulb assembly. Plus the pilot also looked more like a rebel than imperial …

As I was contemplating what modifications to make, I serendipitously discovered the existence of the dual TIE Fighter kit produced by AMT back in the late 90’s (AMT/ERTL No. 8438). There are not only more details, they are more accurate and the panels lines are recessed. And the AMT kit is the same scale as the MPC parts. About 1/51.

I have essential tremors in my hands, and as un-luck would have it, scribing is nearly the only thing I sometimes struggle with as a result. So, when I learned of the AMT kit, I decided to do a kitbash: Stick the MPC kit’s wings on the AMT body. I was surprised at just how little work it took to do this. It’s almost as if there were some design choices for the AMT parts based somewhat on the MPC kit. I will confess that I’m not the first to do this, as there are a few examples of the kitbash available online if you know where to look.

The rest of the build was straightforward.

The parts were primed with either Tamiya Grey Surface Primer, decanted for airbrush, or Mr. Surfacer 1500 Black, thinned about 50/50 with Mr. Color Leveling Thinner.

The cockpit was airbrushed and hand brushed with various colors from Vallejo Model Air and Model Color. The exterior was mostly airbrushed with Tamiya mixes, thinned about 50/50 with X-20A thinner. I also pre-shaded beforehand with more 1500 Black. The wing panels were masked with Tamiya tape to protect the black through a lot of the build.

The cockpit was assembled with CA glue, while the exterior assembly and hull details were joined with various solvents. Specifically, Tamiya Extra Thin, straight MEK and a little Plastruct Bondene, which is Methyl Chloride. I stuck with the ILM aesthetic of not including the clear window or canopy parts.

A few thin coats of Future were used as a gloss seal and wash preparation, in which I used Vallejo Model Wash Light Grey, carefully cleaned up with a diluted alcohol solution. I did accidentally rub down to the primer in one spot. A little touch up fixed that.

The model was flat cleared using a 50/50 mix of Vallejo Mecha Matt and Satin Varnish, thinned with just a couple drops of Vallejo Thinner and Flow Improver.

The base is a 4″x4″x2″ clear acrylic stackable organizer box for office use. I found a six pack on Amazon a while back and used it for my Slave One model for the 2021 Star Wars Group Build and really liked the way it turned out. A piece of wood was epoxied from underneath to support a 7/32″ brass tube for the ship. After a scruff with some high grit sandpaper, the base was primed and painted with Rustoleum rattle cans. I like my bases to be simple and not detract from the model itself.

I had a lot of fun with this build, which is not that difficult or time consuming. If you have these kits just sitting around in you stash and don’t know what to do with them, you might want to consider trying this simple little kitbash. From what I can tell, this is one of the biggest versions of the Interceptor you can build in a polystyrene form.

You can find a link below to a YouTube playlist of this build.

So until next time … stay safe, take care and Happy Modeling!