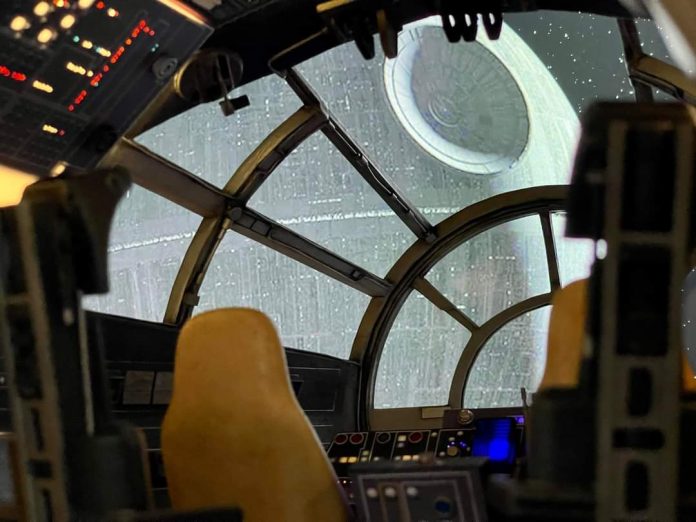 Build description:
Scratch built Millennium Falcon Cockpit for HLI Star Wars Group build 2022.
Scale 1:10
300+ fiber optics
Custom-made lighting board for flashing fiber optics on the rear walls and centre console.  All individually programmed on a Raspberry Pi Zero.
Custom made video with sound playing on a Raspberry Pi Zero
24″ Monitor
Bluetooth speaker
USB hub
Simple Idea but a challenge.
I wanted this build to be a simple enough project that I could do in between other builds that I had in mind.  The idea was to simply find an STL online of the cockpit and print it up and customize it to my liking.  However, what I found was that pretty much every model out there was designed to be viewed from the outside looking in.  Nothing was available that was designed to be viewed from the inside looking out.   As a result, when scaled up and printed they looked way off and wrong.  So very early on it became apparent that if I wanted to build this, I’d have to design it myself from scratch.
For the most part, I didn’t have a plan for building this.  It was let’s start here and see what’s next and try and figure it out along the way.  It’s challenging but fun and after a while, you get used to building with no instructions.
I managed to find the schematics for the cockpit that they used to build the wooden set in A New Hope and I was able to use this for creating the 3D model in Fusion 360.  The model was then cut into pieces and printed on my FDM printer.
Materials:
The model uses a combination of materials including PLA and resin prints.  Anything structural is printed in PLA while anything that has detail like the chairs and buttons are resin.  In addition to 3D prints, I’ve used Styrene sheets for the floors and lower walls, photo paper for the rear panels and center console, and brass tubing for detailing on the window frames and rear chairs.
Lighting:
The lighting was tricky to get right. LuckiIy I found an off-the-shelf desk lamp that was the perfect size and shape to fit around the model.  It gave the perfect lighting for the fiber optics.  However, it was so good, that I had problems with the many flashing fibers that were washed out no matter what I tried, so it’s impossible to see them flash with it on, but they are flashing and I know they are there.
There was no way to block the flight on the fiber optics because of the use of transparent PLA.  Light blocking for the rear walls and center console was a challenge.  A solution was to use the images created in Fusion and then create a 3D model leaving holes where the light had to pass through and 3D printing the masks.  This worked very well and had the added benefit of acting as a support for the fiber optic cables.
Video and Audio:
At first, I was going to simply use a static image in front of the cockpit to simulate space, but it was crying out to have a hyperspace effect so I ended up creating a 7-minute-long video with music and SFX.  This took it to a whole new level!   However, I had to then block out the light hitting the screen from the backlighting on the rear panels.  A lot of times a solution to one puzzle created a new issue that would need to be resolved.
Case:
The case needed to house this is ridiculous.  Because of the 24″ monitor, it’s huge.  The monitor needed to be that size so that you couldn’t see the edges of the screen from inside the cockpit.  I did manage to utilize the large light inside to backlight some buttons on the side of the case so that was a plus.
I didn’t want it to be just a boring black box with a small viewing area at the front, so I decided to pimp it up Star Wars style and mimic the aesthetic of the Falcon wall panels.
The final part of the puzzle was to figure out how to create a logo to put on the case.  I designed the logo in Photoshop and invested in a vinyl cutter which I was going to get this year anyway and cut out the logo as a mask before painting it the case black and adding all the greeblies etc.
Well, it was fun to build.  I hope you like the finished result.
Regards
Michael
1 of 54