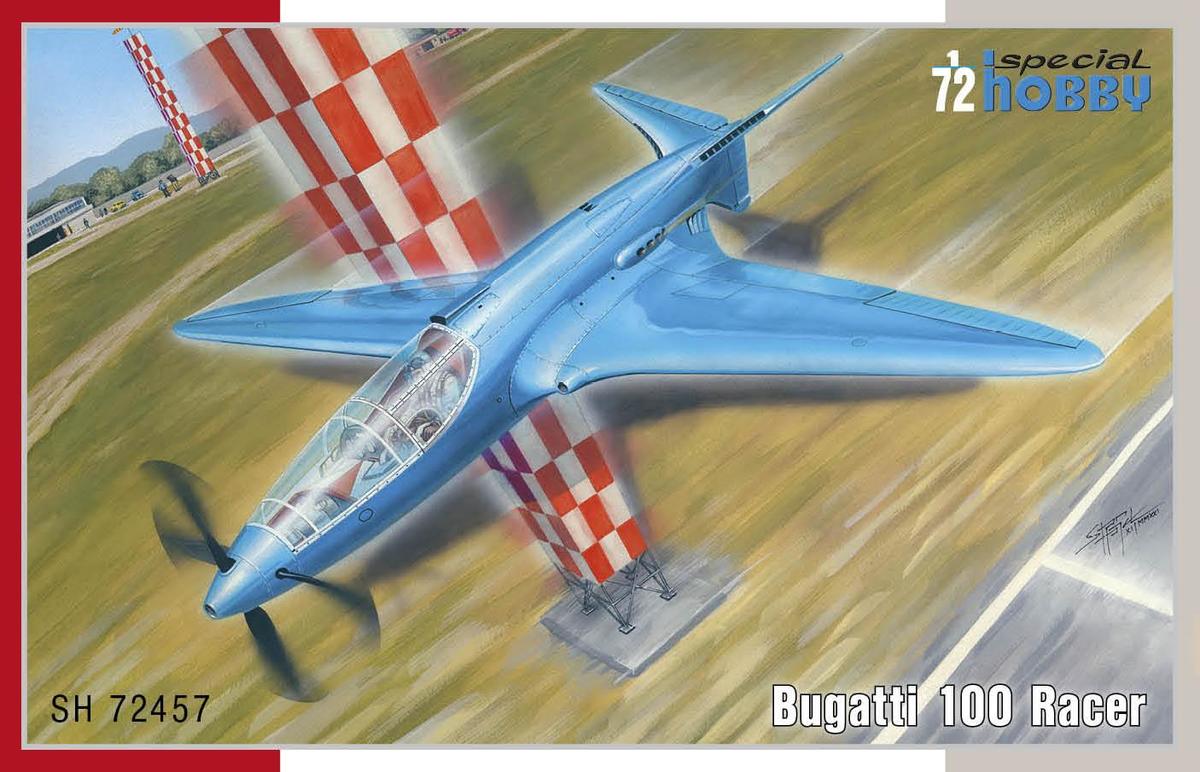 1/72 Bugatti 100P ‘French Racer Plane’
In the pre-war years, Ettore Bugatti, a very well known racing car designer, took the opportunity and decided to turn his attention to aviation too and come with a concept of a racing aeroplane which was to win the then rather popular Deutsch de la Muerthe races. At first, the plane was to be fitted with just one engine, this was later reconsidered and two powerplants were used, placed asymmetrically in the sleek fuselage, each one driving its propeller – these were two, counterrotating. In this shape, the plane was even supposed to break the world speed record. The aeroplane was finished and prepared just before the war broke out, but had to be put out of the sight of the advancing German army. As of now, the Bugatti prototype is placed on display at the EAA Aviation Museum in the USA.
This kit contains two styrene sprues and a single one with a clear injected canopy. As the machine was in blue overall scheme with no markings at all, the kit has got no decal sheet. The schemes are two though, the other one representing a fictitious scheme.

The kit consists of as many as eleven styrene sprues, one clear, one small resin cast item and a fret of photo etches. Full colour instruction booklet and huge decal sheet caters for four marking schemes.

– almost A4-sized decal sheet which includes also complete stencilling for both the exterior and interior, flawlessly printed by Cartograf

– marking schemes for three RAF schemes and one machine operated by the French Aéronavale.

(Two of the British machines flew in the Far East in the support of anti-communist insurgent missions in Malaya and Korea, one machine took part in the British airlift during the Berlin blockade and the French machine was based at Lanvéoc-Poulmic Naval Base in 1951) 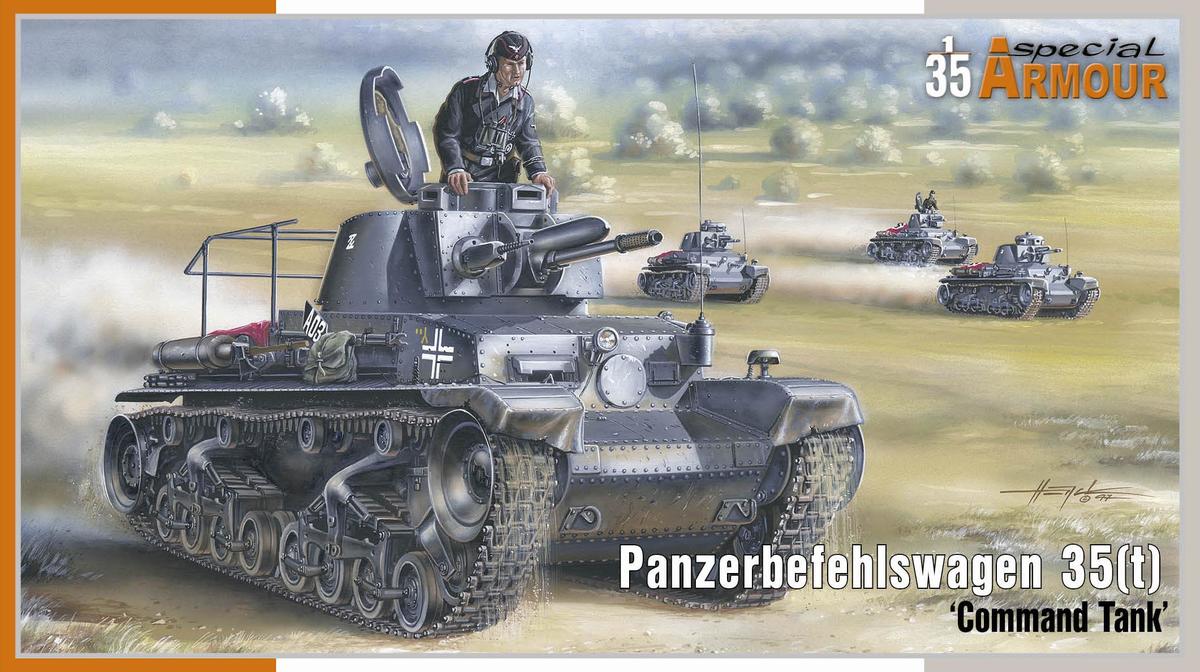 1/35 Panzerbefehlswagen 35(t)
The Skoda Lt.35 tank, designed and built in Czechoslovakia, was introduced to service with the German Wehrmacht as the Pz.35(t). The Germans had some number of the tanks converted to commander vehicles, designated the Befelswaggen Pz.35(t) and put them to action alongside the standard Pz.35(t) tanks in France in 1940 and a year later in the Soviet Union.
The model of the command vehicle comes on five styrene sprues and also contains etches and resin parts. The decal sheet offer two Wehrmacht options, one tank as it fought in 1940 France, the other from the June 1941 attack on the USSR.

Nicely detailed model
A fret of etches and a set of resin parts already in the box. 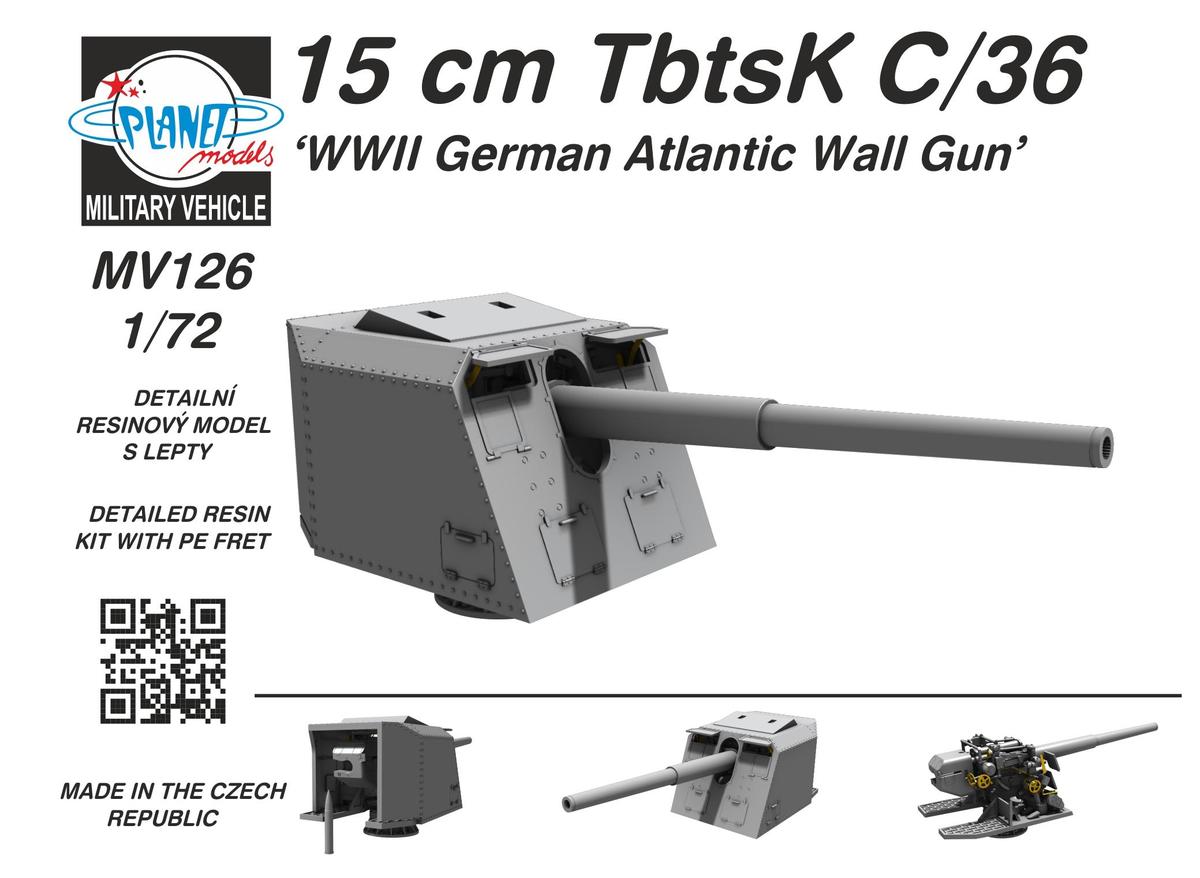 1/72 15 cm TbtsK C/36 ‘WWII German Atlantic Wall Gun’
German naval gun in the standard style gun turret was originally developed as main armament of German destroyers and secondary armament of heavier vessels including the planned battle ships of the Kriegsmarine. Following some modifications due to trouble with the the destroyers’ centr of gravity, majority of the built gun turrets was used in the concrete casemates of the Atlantic Wall. The guns were used both in the open fire positions and the reinforced concrete bunkers. Finely detailed resin cast parts come with a fret of etches.