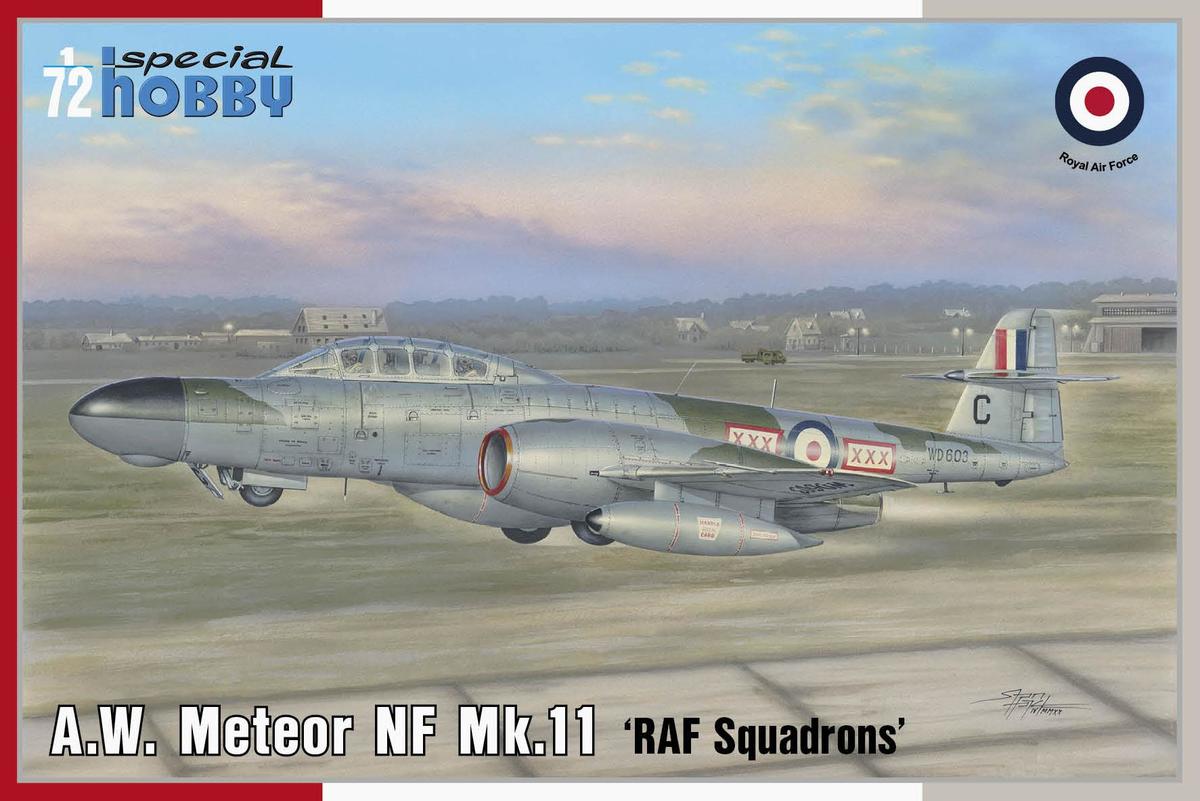 1/72 A.W. Meteor NF Mk.11 ‘RAF Squardrons’
The final generation of the Meteor jets was manufactured by Armstrong Whitworth. These differed from the earlier ones by having crew of two and being fitted with an all-weather interceptor radar unit. In the early years of the Cold War, these Meteors defended Great Britain from Soviet bombers with nuclear weapons on board. The A.W. Meteors were also rather widely exported and served with several NATO air forces as well as in the Middle East.
There are markings for four RAF machines in the decal sheet, two of them as flown over home bases in the UK and the other two depict RAF machines stationed in West Germany 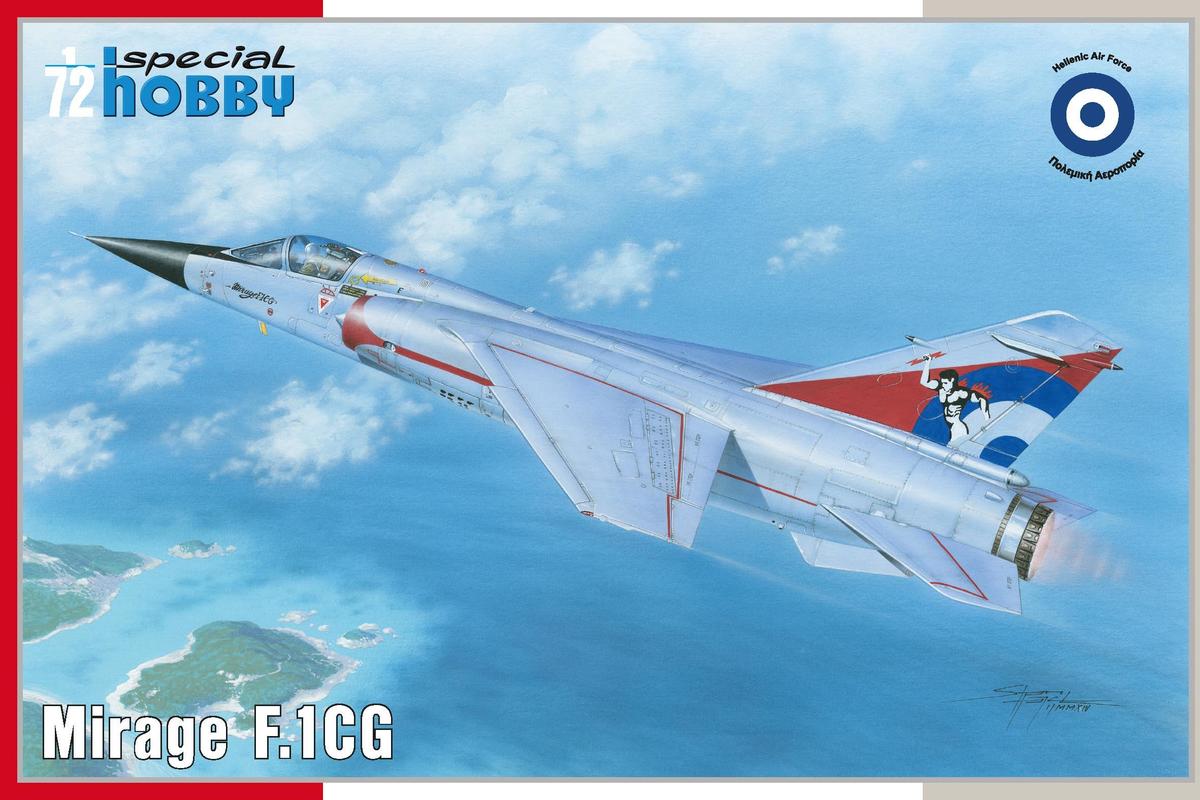 1/72 Mirage F.1 CG
The Mirage F.1C came about as a private venture by the French Dassault company while it had been engaged in a project to fulfil the future needs of the Armée de l´Air for a modern jet aircraft capable of carrying out interception and tactical attack roles carrying conventional or nuclear armament. A variety of designs were put forward in order to replace the outstanding Mirage III family which were currently filling this rome and these were originally designated the Mirage IIIT, Mirage IIIF, Mirage G and Mirage G8. The air force chose the most promising of these design which was the Mirage G8 with a variable-sweep winf but as the military expected a prolonged development of this advanced (for the day) technology they also decided to go ahead with the simpler Mirage IIIF which could enter service sooner and help bridge the gap before the new G8A could be finished. Two prototypes of the IIIF designated F.2 and F.3 were ordered and these were to be powered by a JTF10 engine. On top of these government contracts Dassault also decided to go ahead with their own simple private venture design powered by an Atar 9K power plant and when the other two more advanced aircraft were cancelled by the French government it was the private venture design which was eventually chosen for military service as the Mirage F.1, featuring a small shoulder mounted wing and conventional tailplane.
The first flight of the Mirage F.1 took place on 23rd December 1966 and production aircraft entered servicewith the French military as the F.1C single seat fighter and F.1B two seater training versions. During their service with France a number of these aircraft were upgraded by fitting of IFR probes which resulted in the designation F.1C-200. The air force also flew dedicated recce and ground-attack versions of the F.1 designated respectively the F.1CR and F.1CT, the latter being converted from the earlier F.1C-200 airframes. A total of 246 Mirage F.1s of all versions served with the French and Dassault also tried to offer the aircraft with a more powerful engine to Belgium, Denmark, the Netherlands and Norway. These countries chose the F-16 instead and the F.1E version remained only as a prototype. Nevertheless, the F.1 was exported successfully further afield. In Europe, the F.1 flew with Spain and Greece, in South America, the Mirage saw service with Ecuador, but both in Africa and Asia, the F.1 airframes were widely used, namely with Gabon, South Africa, Morocco, Libya, Iran, Iraq, Qatar and Kuwait. Flying with these air forces, the famous Mirage F.1 saw service and even hot combat action around the world, including mock fights over the Aegean between Greek´s F.1s and Turkish jets, French aircraft were deployed and used over Chad, Ecuadorian Mirages were put in combat against Peru, South African aircraft successfuly fought Angola-Based Cuban MiG jets and during in the Middle East, Mirages even fought on both sides of the conflict between Iraq and Iran.
Our nicely and precisely detailed model has now been restocked in limited number. The kit comes on six styrene sprues, a single clear parts sprue and a few resin cast parts. The decals cater for four Greek scheme options, one of them wearing eye-catching anniversary colours, the other three in various camouflage colours. 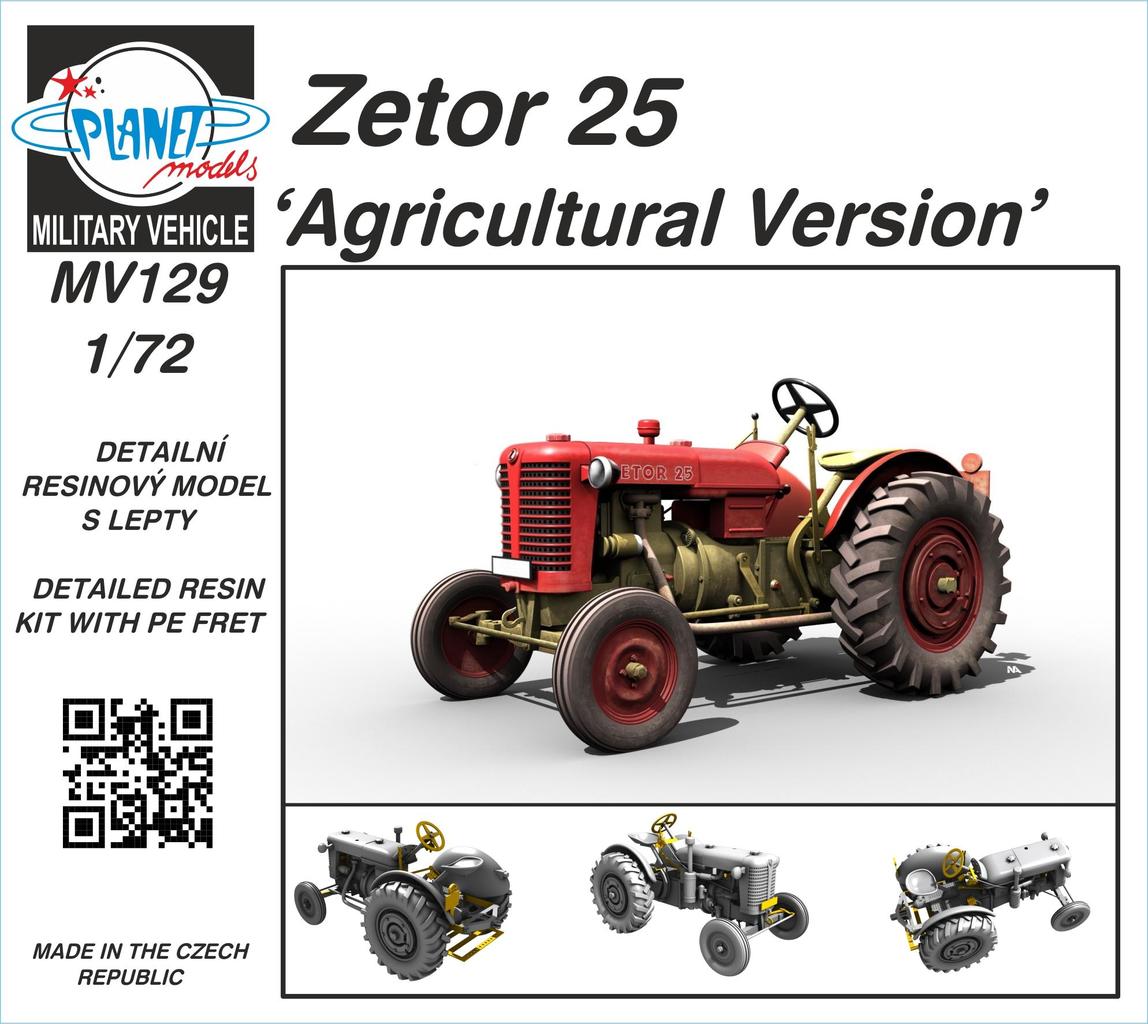 1/72 Zetor 25 ‘Agricultural Version ’
The Zetor 25 tractor was among the first products of the post-war Czechoslovak industry and also the very first tractor to be manufactured by the Zetor company. Up until 1961 when the production line stopped, almost 160 000 of them had been produced and nearly 100 000 examples also sold both in Europe and Asia. Our model features the agricultural version of the tractor. Contains a decal sheet and a fret of photo-etched parts.