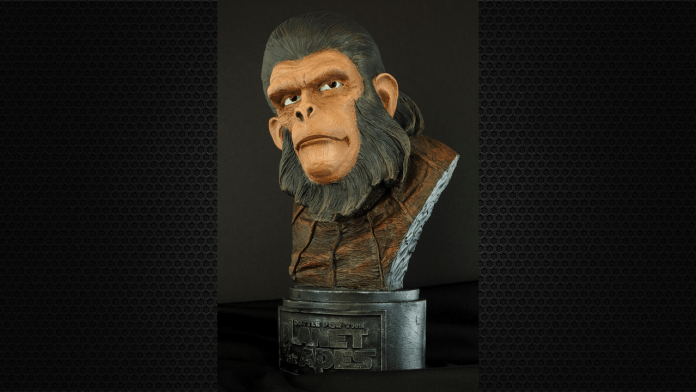 This is a solid resin sculpt of Cesar from Battle for the Planet of the Apes that I found on eBay. The bust is 1/3 scale measuring 9” in height and was sculpted by an artist by the name of Tony Cipriano, dated 2012. I began by priming the entire sculpt in Stynylrez Gray then further primed the face with Stynylrez’s flesh tone. This is the first time I’ve used their flesh tone primer and I just figured it would help with painting the face.

I proceeded with painting the hair and went through a few mixes before settling on using
Vallejo’s black-brown as the base color then built up some lighter and darker tones from there. The lighter tones were painted by adding Vallejo’s beige brown to the mix and the darker by mixing in black. At first, the hair was too light so I toned it down further with a black wash. The face was more of a challenge as trying to match pictures from the movie proved difficult to do. As often is the case, pictures vary because of lighting and white balances making it hard to decide on tones and colors.

My first inclination was to use variations of brown but in the end, the face looked pretty ashen and dull. I was almost on the verge of giving Cesar a Purple Power bath to start over but decided on one last try and turned to Vallejo skin tones instead. The final mix ended up being Vallejo’s Beige Red and basic brown from Craftsman. I added a little of Vallejo’s Sunny Skin tone for the highlights then mixed in more brown along with burnt umber for the shadows. The tones turned out much better with this combination giving the bust a livelier appearance.

This is my first attempt at painting a large sculpt or bust. I’ve been practicing with figures of
various kinds over the last 2 years and figured I was ready to try this. Just by luck, I found this sculpt on eBay and it was under $70 which included shipping for this heavy piece. Overall I am pretty pleased with the final results. I was also happy to see that once the eyes were painted, you could see a pretty decent resemblance to Roddy McDowell. As you can see, I dawned my POA mask and costume for you so you can appreciate the uncanny likeness. I look forward to trying more projects like this in the future. It was a fun project to work on and found it a good challenge for me to push my skills further along.