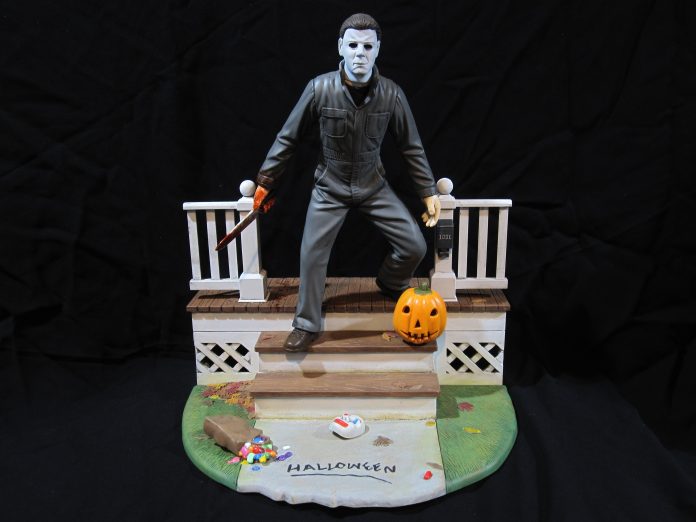 Spencer Wolfe has entered his Michael Myers build in the 2021 SciFiantasy Annual Halloween Group Build. Here is what Spencer had to say about his build.

I decided to build this kit “out of the box” with very little modification. Just build, paint, and weather/dirty it up.

Assembly was pretty straightforward, but obvious seams abound, as is typical with a lot of Moebius figure kits. This was especially true for the hair. To deal with most of the body seams, I mainly used sprue goo and a little thinned acrylic putty but didn’t worry too much about the seams on the porch or elsewhere. I also drilled out the gaps in the latticework.

Once assembled, everything was primed using some old cans of Krylon gray and white primer.

Then I went on a hiatus, working on the HLIFX boards. And around the beginning of October, I finally started painting.

The coveralls were sprayed with Vallejo Mecha Color Dark Grey Green. His hair was brushed with Model Color Chocolate Brown. The eyes and shirt are Model Color Black and the shoes are Model Air Burnt Umber. The white for the porch and Michael’s mask were straight Stynylrez white primer. The skin was first a coat of Game Air Pale Flesh followed by a light coat of Elf Skintone.

Nearly everything else on the base was hand-brushed with various Apple Barrel Craft acrylics. Brown Oxide, Chestnut, Kelly Green, Field Marsh and Country Gray. The pumpkin is Apple Barrel Jack-O-Lantern because … the color is Jack-O-Lantern … The leaves and candy were painted with several different colors of Army Painter. Everything was then sealed with Mecha Color Satin Varnish.

I thoroughly slopped on and wiped off some Army Painter washes to dirty up the porch and Michael’s overalls, as well as add some depth to the grass, leaves and wooden boards. After some dry-brushing with more Apple Barrel, I flat cleared everything with Mecha Color Matt Varnish.

Finally, I touched up the gloss on the candy and Michael’s eyes and then used Tamiya Clear Red mixed with just a touch of Model Color Black for the blood effects on the knife, hand and a few spots on the porch.

I didn’t modify the LED light for the pumpkin in any way. I suppose some diffusion could help, but I like the idea of seeing the light source as you would a real candle flame.

This kit is not without problems. Michael’s feet are pretty tiny, his hands look a bit too comical and there are scaling problems between him and the base. But, I still had a lot of fun working on it!