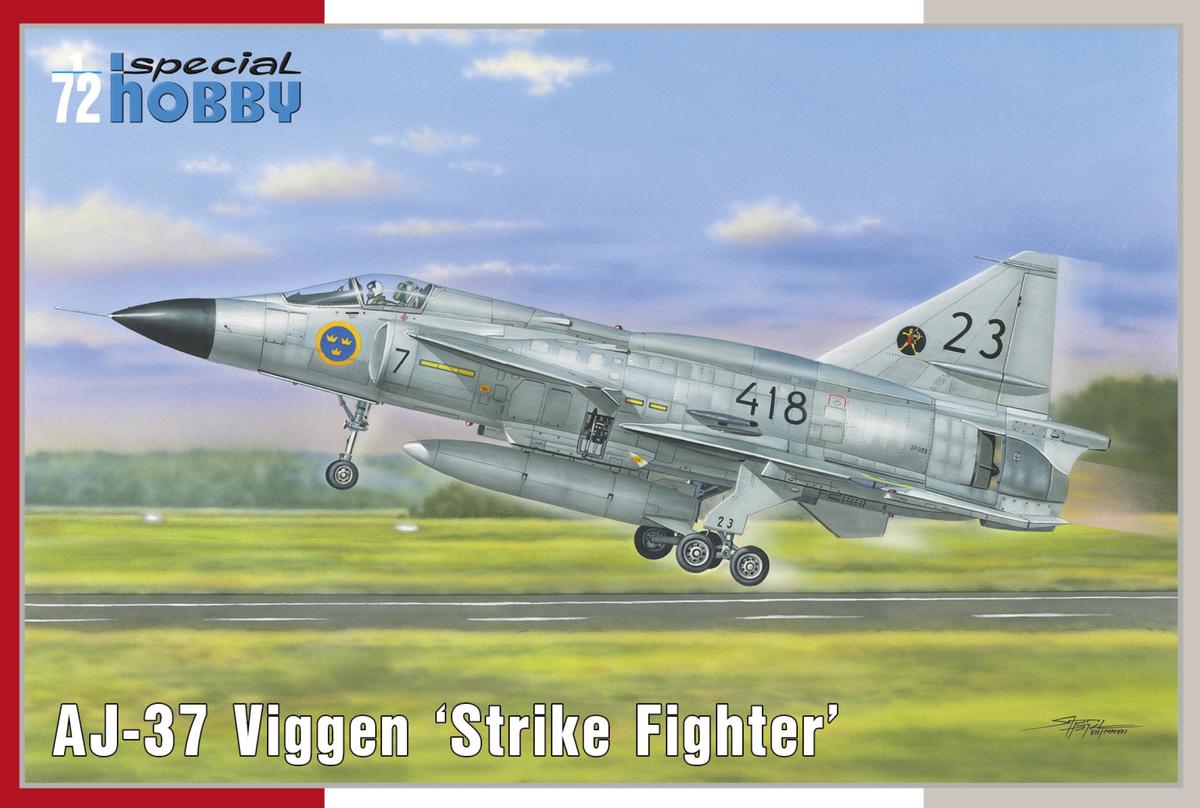 1/72 AJ-37 Viggen ‘Strike Fighter’
The SAAB 37 Viggen was simply an aircraft well ahead of its time. Rather unorthodox solutions brought by the designers not just allowed to meet the requirements, they also caused that the Viggen even exceeded them in a couple of respects. The Swedish Air Force placed order for several versions of the aircraft which would comprise the same basic airframe and would differ by additional equipment based on the role the version should operate in. The type was powered by a Volvo RM8, a licence-built Pratt & Whitney JT8D airliner turbojet fitted with the afterburner chamber and thrust reversers. This, along with the twin-delta wing allowed for excellent performance during take offs and landings especially on short airfields. The Viggen also featured a folding tail fin which improved the handling of the aeroplane on auxiliary airfields, enabled very easy handling during while towing the airplane into the hangar and also contributed to better concealment of the plane during operations off non-standard places. The type’s avionics was also among the very top a the time, the Viggen was the first military jet to feature an onboard computer with integrated circuits. The version first introduced to service with the Swedish military was the AJ37 Viggen, followed shortly by the SK37 two seat jet trainer, the SF37 recce version fitted with cameras in the modified nose section and the SH37 anti-shipping variety with different type of avionics and capable carrying a dedicated armament. Around ten years after the initial version had been introduced into the service, a second generation of the Viggen, the JA37 fighter started to emerge from the production line.
Our model portrays the initial production version, the ground-attack AJ37 Viggen. The kit comes on nine styrene sprues, the decal sheet with a very wide range of servicing stencils brings markings for three Swedish schemes, one of which is in bare metal, the other two in the typical Swedish splinter-type camouflage. 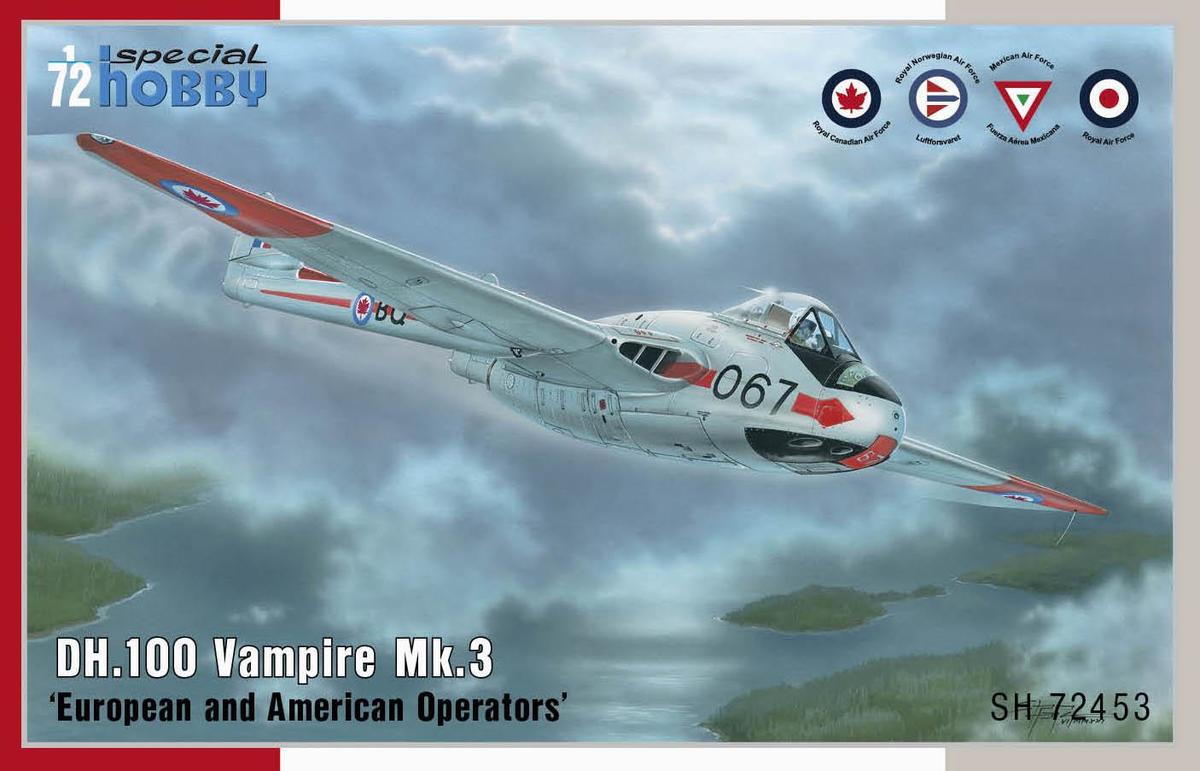 1/72 DH.100 Vampire Mk.3 ’European and American Operators’
The DH.100 Vampire was a British first generation fighter jet aeroplane and was produced in several versions both for the RAF and for export. The Vampire Mk.3 version saw service not just with the domestic force, it was also operated by military in Canada, Norway and Mexico. And these four operators is what you will find offered on the colour schemes and decal sheet of this kit. It might also be interesting to mention that the Mk.3 Vampires were the very first jets to serve with the air forces of Mexico and Norway.
The kit consists of two styrene sprues and a single clear sprue. The decal sheet brings markings for a British, Canadian, Norwegian and a Mexican options. The Canadian one offer a feature typical for the RCAF airframes, a glazed nose section in front of the cockpit. 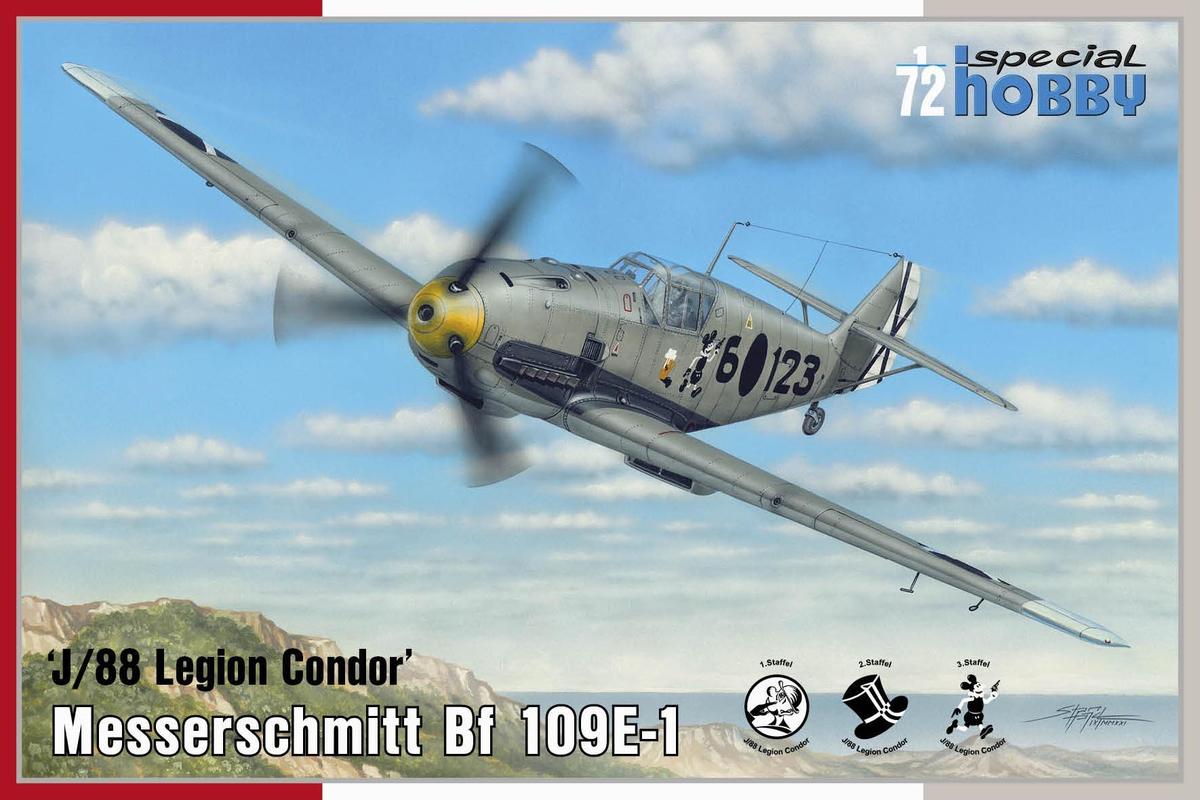 1/72 Messerschmitt Bf 109E-1 ‘J/88 Legion Condor’
Between 1939-40, the Messerschmitt Bf 109E was arguably the very best fighter aeroplane of the world. The type was produced in two main subvariants differing by the type of armament, either heavily or lightly armed. The lightly armed airframe was fitted with machine guns only, two of them above the engine, the other two in the wings. The versions produced with this sort of armament were the E-1, E-5 and E-6. In Spain, during the Civil War, both the lightly and heavily armed Bf 109s served with the ‘volunteer’ Legion Kondor. Our kit brings three E-1s wearing a standard grey and blue camouflage scheme. Machine 6-119 has the ‘Holzauge’ emblem painted on the fuselage, 6-121 sports the very well know Top Hat emblem while the final option, airframe 6-123 has a beer glass and a Mickey Mouse cartoon to make it even more interesting for the modeller.
This release is a follow-up to Messerschmitt Bf 109E-3 and Bf 109E-4 models which have recently been awarded the Models of the Year 2021. The kit comes on two styrene sprues and one clear sprue. 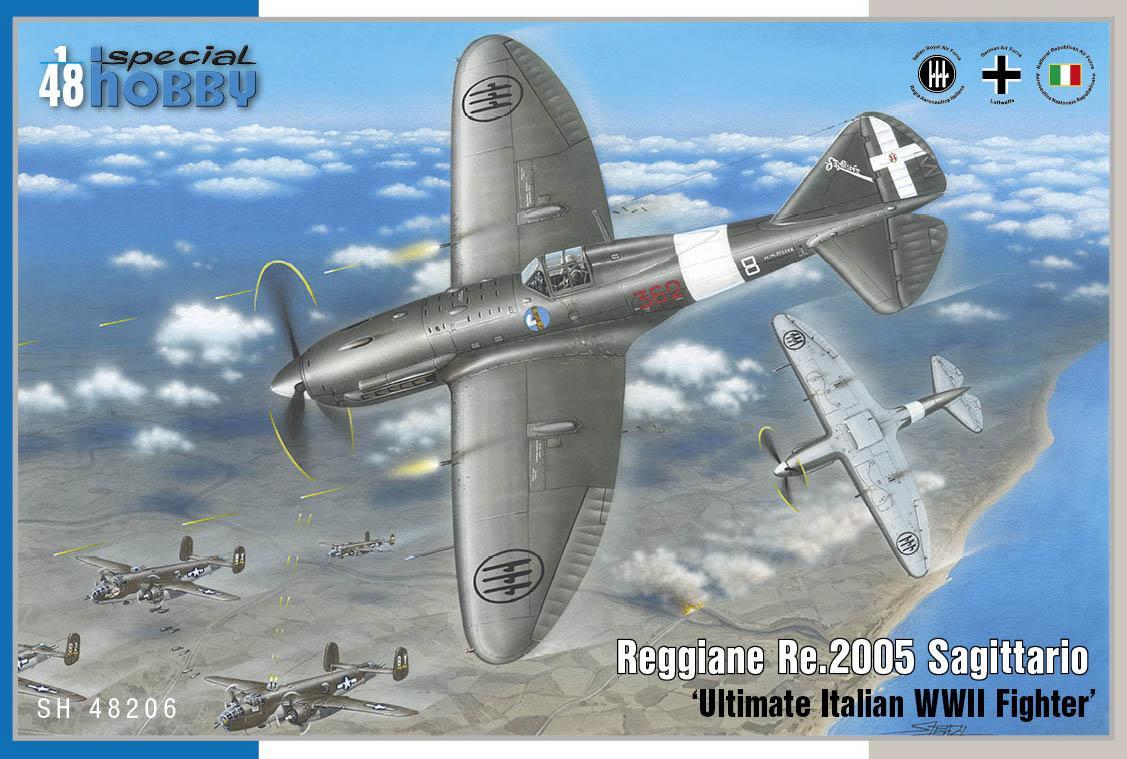 1/48 Reggiane Re.2005 Sagittario ‘Ultimate Italian WWII Fighter’
The Re 2005 was one of the very best WW2 fighter aeroplanes to be operated by Italy. Even though just under 40 examples were finished in 1943, the plane saw service with three forces, the Regia Aeronautica, Aeronautica Nazionale Repubblicana and the German Luftwaffe. And markings of all these three operators are offered on the kit’s decal sheet. 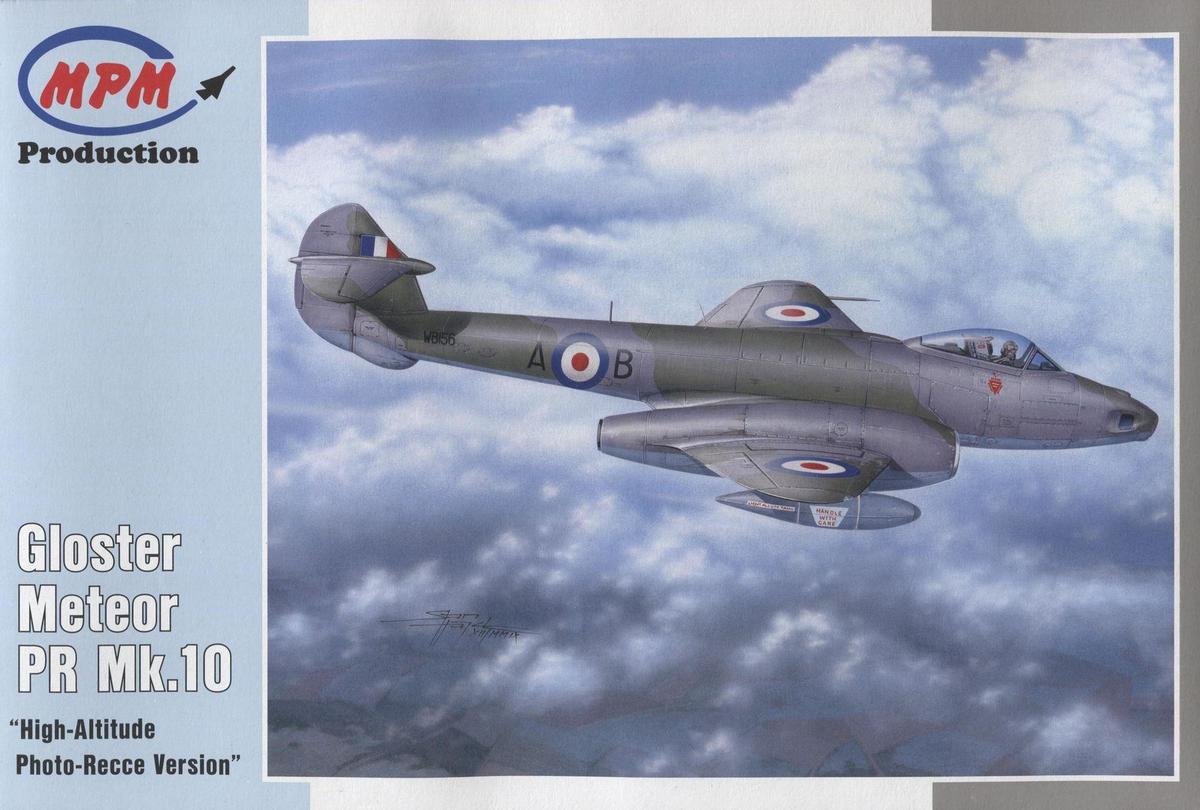 1/72 Gloster Meteor PR Mk.10 “High-Altitude Photo-Recce Version”
This dedicated high-altitude reconnaissance version of the Meteor twin-jet fighter was operated in the 1950s over the Middle and Far East as well as from West Germany bases where the type was used to peep over the so-called Iron Curtain. The decal sheet brings markings for two machines flown in the FRG, one of them in two colour schemes. Then also two machines in bare metal, one of which operated from Egypt flown by a WW2-ace M.Mansfeld while the other one was based in Singapore.